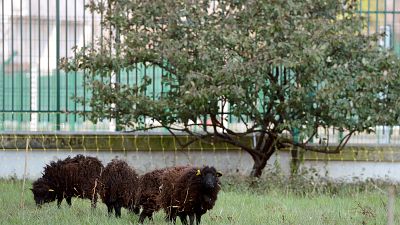 Sheep are being used to cut grass in France as an environmentally friendly alternative to traditional lawn mowers.

In 2013 Paris city council began a trial, allowing sheep to graze in urban parks in a bid to replace petrol-powered options. Four woolly ewes from Brittany were set to work around the Paris Archives building.

“It might sound funny, but animal lawn mowers are ecological, as no gasoline is required, and cost half the price of a machine,” explained Marcel Collet, Paris farm director, at the time.

Sheep have become a regular occurrence in Paris since then too. In July, 25 animals made the journey from the suburb of Seine-Saint-Denis to the heart of the city.

Organised by the Urban Shepherds collective, this memorable sight of sheep roaming the streets was intended to highlight the future of urban agriculture at the close of the city’s first Agricultural Meetings of Greater Paris.

The Urban Shepherds collective have been herding sheep in the city since 2012 in Seine-Saint-Denis. From here the shepherds and their herd regularly cross on foot to a graze-worthy public garden in Paris.

“In reality, they are much more than these “green mowers” ​​to which they have sometimes been reduced,” says Guillaume Leterrier, co-founder of Paris cultural media Enlarge Your Paris.

“By grazing, they cut hedges, regulate lawns. Unlike goats, which eat everything, sheep eat only the greenest parts of hedges and meadows. They are indeed gardeners but also landscapers since they intervene in public spaces.”

Paris isn’t the first place to replace machines with animal gardeners. In 2009 Google caused a stir when it published a blog post about renting a herd of goats to keep the grass short at its California headquarters.

The company said it was a “low carbon” approach to lawn maintenance and even hired a border collie, called Jen, to keep the goats in check.

The company that Google sourced the goats from, now called Living Systems Land Management, has a herd of 3,500 four legged lawn mowers. Not only do they keep the grass from becoming overgrown, their tendency to eat everything in sight means they are just as happy to eat unwanted weeds.

That means they can both manicure your grass and act as a replacement for pesticides.

Since Google put out its blog post, the eco-friendly business of living mowers has grown significantly. In 2018, Forbes revealed that several hundred rental companies were operating in the US alone.

Customers looking to manage their land in a more natural way range from big cities, like Paris, and businesses, like Google, to your average homeowners with a back garden to tame.

How this tiny bacteria could change air travel forever