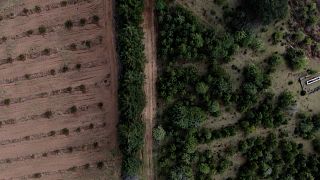 We all love avocado. But while we’re mashing it into our sourdough on a Sunday morning, it’s causing much bigger problems on the other side of the world.

In Cheran, a self-governing township in Mexico, the scaly green fruit has inspired a decade long battle. The people here have declared themselves autonomous and formed their own government in a bid to protect their land.

For years the town has been warding off illegal logging in its pine-covered hillsides. The trees are cut down to make way for avocado plantations.

Avocados offer farmers profits like no other crop, with many describing it as ‘green gold’. However clearing forest land to plant avocados reduced biodiversity and the thirsty plants drain local water supplies.

It’s not just the environmental effects of the avocado plantations the people of Cheran have to worry about either. Avocado growers often attract the attention of drug cartels and are subject to extortion and violence.

“We realised that the only thing the avocado brings is violence and blood, at the expense of the Indigenous communities,” says David Ramos Guerrero, a member of Cheran’s self-governing farmers' board.

Taking the fight into their own hands has been so successful it's as if a line had been drawn across the mountains. Avocados and cleared land on one side, pine forest on the other.

Inspired by Purpecha Indigenous women taking a stand against illegal logging in 2011, the town armed itself and blocked the road to reclaim their land.

Ten years on, the fight to preserve the forests in the western state of Michoacan continues. On a legislative level, the town has managed to outlaw change in land usage, specifically where it would be converted for avocado growing.

Cheran has also formed a volunteer anti-logging patrol unit. If farmers don't agree to stop logging or planting avocados, the unit will pay them a visit.

Though the unit could be mistaken for the cartel, riding in pairs of pickup trucks armed with AR-15 rifles, they are there to protect nature. They seize axes, chainsaws and logs from anyone caught illegally logging.

"The community is the one demanding and asking that we respect nature, just like our ancestors taught us. Taking care of nature, instead of destroying it, fortifying it through reforestation," Ramos said.

Watch the video above to learn more about Cheran’s fight against avocados.