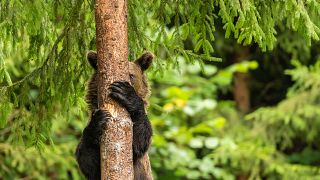 Golden silk monkeys, black bears and raccoons were the stars of the show in this year's Comedy Wildlife Photography awards.

The annual competition winners were announced on the BBC's One Show with Ken Jensen taking first prize for his astounding snap of a monkey in the Longsheng Gorge, China, titled 'Ouch!'

The competition saw over 7,000 images from all over the world showcasing the funniest wildlife moments. From gophers to mudskippers, we take a look through the best photos capturing truly rare wildlife encounters.

According to WCS Russia, the Kamchatka bears once populated the entire Kamchatka peninsula but due to mining and human developments, the continuous bear population is now far more fragmented. The bears feed on various types of salmon found in bodies of water similar to where this pair is seen dancing.

'See who jumps high' by Chu Han Lin, captures the energetic leap of a mudskipper fish in Taiwan. The mudskipper is a unique type of fish that is able to live on land for up to two days at a time. As their name suggests, the fish moves across the terrain by skipping into the air which we see in this incredible image.

Racoons were a prominent feature amongst the finalists with Jan Piecha's 'Secrets' and 'How do you get that damn window open?' By Nicolas de Vaulx both receiving high commendations.

Racoons are native to North America with these images revealing the range in their habitats. Living in cities, woodland, parks, suburbs and even landfills.

Piecha's image shows three racoons 'gossiping,' a rare sight for a species that is typically solitary - with the exception of the breeding season.

Roland Kranitz's 'I got you' features two gophers in a playful toss-up, a breathtaking demonstration of their athleticism.

Kranitz explains, “I spent my days in my usual "gopher place" and yet again, these funny little animals haven't belied their true nature,” revealing the element of luck that goes into these hilarious and rare snapshots.