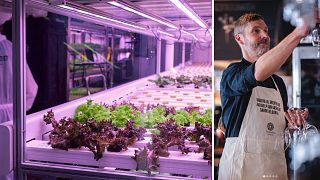 A restaurant in Stockholm, Sweden, is asking staff to wear aprons that capture greenhouse gas from the air.

The aprons were produced in a pilot scheme developed by H&M-backed researchers, as the fashion industry struggles to lower its climate impact.

The Hong Kong Research Institute of Textiles and Apparel (HKRITA) developed the chemical process. It comes in the form of an amine-containing solution which is used to treat cotton - fibre, yarn or fabric - making the material pull carbon dioxide towards it and capture it. This then stabilises it and stores it on the surface of the textile.

The team were inspired by techniques used in chimneys of coal-fired power plants to limit emissions.

"Many power plants have to scrub as much carbon dioxide as they can out of the air before the exhaust is released," says HKRITA CEO Edwin Keh. "We thought 'why don't we try to replicate that chemical process on a cotton fibre".

One apron is able to absorb about a third of what a tree absorbs per day.

One apron is able to absorb about a third of what a tree absorbs per day.

"The (capturing) capacity isn't super high but this is quite inexpensive to produce and quite easy, and we think there are a lot of potential applications," explains Keh.

In the restaurant, after the aprons are used, they are heated to 30-40 degrees Celsius.

At this high temperature, they release the CO2 they were storing - and this is then used in the restaurant’s greenhouse to feed to plants.

“It is used as food for the plants so it completes the photosynthesis cycle and then once again it becomes nutrient for plants," says Keh.

Fashion giants are under pressure to change their ways

Fashion giants are under increasing pressure to address the enormous carbon footprint they produce as shoppers become more aware of the environmental impact of clothes and as global temperatures rise.

Swedish fast fashion chain H&M has been severely criticised for its huge negative impact on the environment.

But the H&M foundation claims the innovation could potentially be a game-changer in the reduction of global CO2 emissions.

Projects to develop CO2 absorbing textiles are however at an early stage, and their potential contribution to lessening the environmental impact of the textile industry remains to be seen.

Keh says the institute will now develop its technology further, and try to find other uses for it, as well as other ways to use or dispose of the captured CO2.

Watch the video above to see how the apron works.