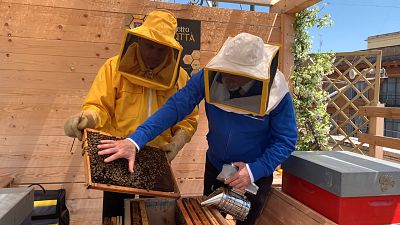 Italy’s Carabinieri is famous for fighting the country’s toughest criminals, most notably the mafia. But a special unit charged with protecting forests and the environment, is now taking on a totally different kind of organised group.

Since 2018 the rooftop of the force's headquarters in central Rome has been home to beehives. But this is no honey trap, it's part of a deliberate sting operation, albeit with a twist.

“One of the main duties of Italy’s Carabinieri police force is to monitor the environment but here we’re using bees in a new way, as biodiversity indicators. They monitor an area that's 1.5-2km in size. That helps us to can gather useful information, which isn’t normally available, about the atmospheric pollutants that might be present in urban areas, such as dioxins and other substances,” explained Lieut. Col. Giancarlo Papitto, from the Carabinieri's Forestry and Environment Unit Command.

In other words, the bees are Italian law enforcement’s insect informers, helping them to better understand the state of our environment. General Pietro Antonio Marzo told Euronews's Rome correspondent Giorgia Orlandi the project is helping to provide vital information on air pollution levels.

“This will allow us to have a fuller picture of the situation and help improve to urban living and will affect political decisions in a way that will improve the quality of life in our cities and the health of our citizens,” he says.

But why the city and not the countryside? The President of Italy's Apiculture Federation Raffaele Cirone says urban areas also have a special buzz.

“Cities are naturally rich in biodiversity. If you take balconies, for example, where so many different plants are being taken care of, or gardens and green urban areas, these are filled with species that appeal to bees. Both the nectar and the pollen that is being produced in Rome tell us that the city has a great variety of flowers,” Cirone said.

Making a beeline for Europe

And the Carabinieri have no intention of ending the project any time soon. Quite the opposite, in fact. Officers have already begun to spread their wings with a recent €500,000 investment to extend the beekeeping project to other cities across the country.

“Italy could become the first pilot case and what has been achieved here could be replicated across the rest of Europe,” he said.

Just like crime-fighting, beekeeping isn’t without risk, but one of the officers in charge of taking care of the bees, Sergeant Aleandro Sciunzi, says it does have its benefits.

“**Working with bees** is a world apart. It's so peaceful and of course, you have to like the job because there are pros and cons. Bees will never become the best friends of humans.”

So while the relationship may not be as sweet as honey, unlike the criminals, the bees are helping both us and the planet.

Watch the video report above to see Rome's unlikely beekeepers in action.

You are what you eat: How industrial chemicals contaminate our bodies