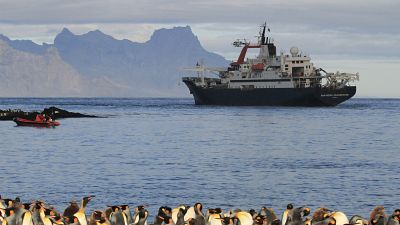 The French Southern and Antarctic Lands (TAAF) is a part of the world you’re probably not familiar with - despite the fact it’s the second largest protected area in the world.

TAAF (or Terres australes et antarctiques françaises) is made up of a number of archipelagos scattered across the Indian Ocean. Several of them surround Madagascar, off the West coast of mainland Africa, whilst others are, frankly, nowhere near anything.

There are no permanent inhabitants of TAAF but a rotating population of scientists, military personnel and research assistants which fluctuates from around 150 in winter to over 300 in summer.

Cédric Cotte is a scientist at France’s Natural History Museum in Paris specialising in marine life and evolution. Right now, he’s leading an expedition to TAAF to study the area’s open water creatures and how they’re adapting to climate change.

Aboard the Marion Dufresne, a ship stationed in Réunion, Cotte and his team are taking samples from a specific column in the water, all the way down to 1,000m below sea level. The aim of the Themisto Programme, led by Cotte, is to understand more about how the whole ecosystem exists in the region.

“We are going to look at how organisms adapt if global warming changes their distribution, if they have particular behaviours that allow them to adjust to their new environment,” Cotte says.

“It will allow us to understand how important they are for the climate and therefore to know if these are biological systems that we will have to pay particular attention to in the future, in relation to their possible uses.”

According to Cotte and Nina Cossin-Sevrin, a PhD student studying king penguins there, this part of the world is particularly important to scientists as the effects of climate change are more pronounced in polar regions.

“Surveying king penguin populations is important because we expect them to be the first to undergo and be impacted by climate change,” Cossin-Sevrin explains to Euronews Green.

“Monitoring their population also allows us to obtain clues as to the demographics of their prey, since the two are very correlated.”

Watch the video above to learn more about the research taking place in TAAF.