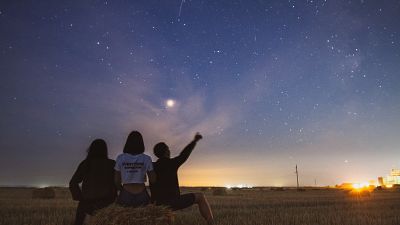 The cost of living crisis could be driving a reduction in carbon emissions and light pollution with unexpected results   -   Copyright  Rad Pozniakov
By Tim Gallagher  •  Updated: 18/05/2022

The cost of living crisis is leading to clearer skies in an unexpected boon for stargazers.

With the war in Ukraine and global inflation driving up bills, the countryside charity CPRE has found that careful energy use is reducing light pollution.

Severe light pollution has fallen for the second year in a row in the UK, according to CPRE’s records.

A citizen science survey of 2,500 participants found that only 49 per cent of respondents could see ten or fewer stars in the Orion constellation with the naked eye (the definition of severe light pollution) last year, compared with the peak of 61 per cent in 2020.

The rise in people working from home is one factor, leading to fewer clusters of office lighting. While more recent concerns over electricity bills are also causing residents to limit their usage.

Light pollution can be damaging for human health and wildlife and the charity advocates turning off garden lights, dimming street lights, and improving lighting design to lower carbon emissions.

“If there is a silver lining from the legacy of lockdown and, now, the soaring cost of energy, it is that it has never been clearer how simple it is to cut carbon emissions and energy bills while improving our natural environment.”

What is the EU doing about light pollution?

According to the EU, 99 per cent of its population live in areas where the night sky is above “polluted” status, with implications for the health of both people and ecosystems.

The American Medical Association warns that light pollution is linked to reduced sleep times, dissatisfaction with sleep quality, fatigue, impaired daytime functioning and obesity. Excessive lighting at night is also thought to cause reduced amounts of the hormone melatonin which helps to induce sleep and boost the immune system.

Light pollution comes at a financial cost too, with estimates that wasted light has a price tag of €5.2 billion to the EU and emits 23.5 billion kg of CO2 per year.

In a triple bid to save money, the environment, and citizen’s health, the EU has adopted revised criteria for street lighting and is advocating the widespread use of LEDs. Meanwhile some countries like Croatia, Slovenia, France and Italy have nationwide legislation on light pollution, with some adopting dark sky areas which can be marketed as tourism spots.

France in particular introduced stringent laws on outdoor lighting at the beginning of 2021.

“A clear view of a star-filled night sky has a hugely beneficial effect on our mental health and, like access to other forms of nature, helps reduce stress and increase a sense of peace and wellbeing,” says Marrington.

“Research has even shown that regularly spending time looking at the stars can lower blood pressure and reduce depression.”