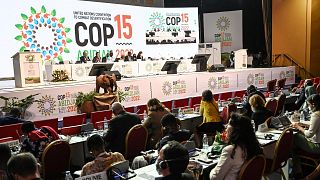 A catastrophic cocktail of land degradation, deforestation and desertification is fueling conflict, poverty, hunger and migration in the world’s most vulnerable populations.

It is pushing the world toward a sixth mass extinction and fuelling biodiversity loss that could cost more than 10 per cent of the world’s annual gross domestic product, according to the United Nations.

It is also the major topic of conversation at COP15, a UN-organised conference on deforestation and desertification that started on Monday in the city of Abidjan, Cote d'Ivoire. What COP26 was for air and climate, COP15 aims to be for land, and its protection and restoration.

“The basic needs and incentives for human beings is access to food first,” organiser of the conference Abou Bamba told Euronews.

With land degradation comes reduced food production - people don’t have enough money or resources to take care of their families.

“For those young people who used to be farmers or fishermen in countries like Somalia, now they have their hopelessness, they have nothing to do and they want to cross the Mediterranean,” Bamba explains.

For those young people who used to be farmers or fishermen in countries like Somalia, now they have their hopelessness.

In COP15’s host country, Côte d’Ivoire, 92 per cent of primary forests have been lost since it gained independence in 1960. Nearly 60 per cent of the land used to grow crops is affected by soil degradation.

Many countries in Africa also relied on Russia and Ukraine for imports of crops like wheat and vegetable oil. But as supplies have been disrupted and prices rise, the food security crisis is worsening.

The impact of climate change consequences combined with food insecurity brought on by the war in Ukraine are now threatening peace and democracy across African nations.

“That's the reason why 196 countries and more than 5,000 delegates are converging in Abidjan.”

“So that solutions can be brought to the table to fix a situation, which is kind of emerging but if we don't deal with it properly, might escalate into something terrible.”

Can we reverse the problem of land degradation?

There is still hope to rectify the situation and prevent scores of people from having to leave their home countries. By investing in restoring Africa’s soil, the organisers and participants of the UN conference believe that millions of Africans who might otherwise leave for Europe will stay.

“The world is approaching the point of no return in land degradation, desertification and deforestation, but we can reverse it if we act now,” says Ivorian President Alassane Ouattara.

“At COP15, Côte d’Ivoire will launch a new global cooperation framework to restore forests and land, boost food production, create jobs for young people and lift rural women out of poverty. We call on all countries to honour the pledges made at the 2015 Paris climate accords to fund this important work.”

The country is launching a massive €1.4-billion land restoration project over the next five years. It incorporates advanced technology solutions including tree-planting drones, investment in sustainable agriculture and social projects to enable gender equality.

While many in Europe are conscious of the issue of migration, Bamba believes few are aware of the joint effort needed to tackle the root of the problem.

Alongside funds from Cote d'Ivoire, the Abidjan Legacy Program aims to raise up to €950 million of international funds to support Ivorian land restoration and sustainable agriculture by 2050.

“We have to work together with European countries, with people in Europe,” Bamba adds.

It is not only for African countries to consider or to fix the problem.

“I think there is work to be done in terms of raising the awareness of people in Europe, just so that you can have all the elements of the equation. It is not only for African countries to consider or to fix the problem.”

Bamba adds that if the Abidjan Legacy Program is successful, we would find ourselves in a win-win situation.

European countries reluctant to see people crossing the Mediterranean Sea and African nations worried about young people leaving their families behind would both be happy.