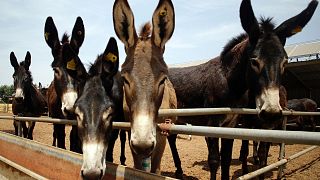 Vast numbers of donkey skins are being sold illegally on social media sites, a new investigation has revealed.

Traders are trading the animal hides on Facebook, Instagram, YouTube and other online ‘marketplaces’, often breaking national laws to do so, according to the Donkey Sanctuary.

The charity estimates that some 4.8 million donkeys are trafficked and killed a year for their skins. Many are used to produce ejiao - a traditional Chinese remedy.

It has accused social media firms of not doing enough to combat the illegal arm of this trade.

"There is no doubt that the global ejiao trade is having a devastating impact on the welfare of donkeys around the world, who suffer at every point from source to slaughter,” says Marianne Steele, acting chief executive officer of the Donkey Sanctuary.

“This new research demonstrates just how vast the online donkey skin trade has become, and how entrenched it is with criminal activity and other illegal wildlife trafficking."

Like many African countries where donkey populations are straining under the demand for ejiao, Kenya introduced an export ban in March 2020. But that didn’t stop one company from offering 2,000 skins to an undercover investigator in January last year.

How is the illicit donkey-skin trade linked to other forms of animal crime?

"We found almost 20 per cent of donkey skin traders operating online also sell some form of wildlife product, including species of conservation concern such as elephant ivory, pangolin scales and big cat parts,” says Dr Ewan Macdonald, co-author of the paper published in the Conservation Science and Practice journal.

He said this matters, because customers shopping for donkey skins can easily stumble across other products for sale, thereby contributing to “the ever-worsening biodiversity crisis.”

"Unsustainable and under-regulated trade in wildlife is a major driver of wildlife declines, impacting as many as 20 per cent of vertebrate species,” Macdonald adds.

Some of the 382 donkey-skin sellers found on e-commerce sites were also offering drugs, fake passports and even human body parts.

And wildlife parts aren’t the only nefarious items being hawked by these online sellers. Some of the 382 donkey-skin sellers found on e-commerce sites were also offering drugs, fake passports and even human body parts.

The Donkey Sanctuary’s new report describes the donkey skin trade as a ‘Trojan Horse’ for wildlife trafficking. In some countries where exporting donkey skins is still legal - such as the 20 that currently have deals to trade hides with China - they were found wrapped up with other illegal wildlife materials or class A drugs.

Could social media sites do more to clamp down on donkey skin sales?

It is not the first time that social media giants have come under fire for failing to tackle illegal wildlife sales on their platforms. Online activist network Avaaz has recently drawn attention to the advertisement of hundreds of cheetah cubs on Facebook.

Meta, Facebook’s parent company, says that the trading of endangered wildlife or their parts is prohibited on its platforms. It has yet to publicly respond to the latest claims made in the Donkey Sanctuary report.

"By cracking down on the sale of donkey skins on their platforms, eCommerce and social media sites will not only prevent considerable cruelty to donkeys, but also help eliminate the other criminal activity that is taking place alongside it and support thousands of families who rely on their donkeys to survive,” says Steele.

The report also has recommendations for national governments, global shipping agents, and the ejiao industry itself. These include a call to move away from using the skins altogether, switching to “more sustainable sources of raw materials” such as those created from lab grown animal cells.