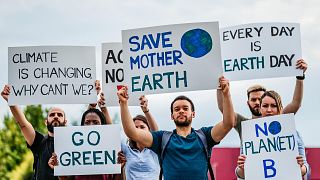 On Thursday, UK Education Secretary Nadhim Zahawai will announce the creation of a new Natural History GCSE, set to be introduced from in 2025.

The announcement has been met with a mixed response from students. Many are criticising the course for being too narrow, inaccessible or incomprehensive, whilst others have welcomed it with open arms.

This course risks ‘siloing knowledge about the climate’

This new GCSE syllabus won’t be the only subject where environmental issues are covered, but it is the first to focus exclusively on conservation and the study of organisms. GCSEs are typically undertaken between the ages of 14-16, with students usually having to wait until their final years of school to access more in-depth environmental qualifications.

Options for climate-related education in the UK are so limited presently, that students like 15-year-old GCSE student and climate activist Charlie Sweetman are moving continents to access it.

"Next year, I will be going on to study for an International Baccalaureate CP Climate Action Leadership Diploma in Vancouver Island as part of the first cohort given the opportunity to take part in such a course at our level of education," Charlie Sweetman Euronews Green.

Despite their clear interest in climate education, Charlie feels that the new GCSE option will actually limit the opportunities for young people to learn about environmental topics.

‘It furthers the siloing of knowledge about the climate into optional subjects, all under the guise of progression. If it were extended to include the social, political and cultural impacts of environmental degradation in addition to wider curriculum reform, I would be a lot more interested."

I wouldn’t have chosen this GCSE as it’s too specific and ignores the sides of the climate crisis, which I feel most strongly about.

Although she wants to pursue a career in the humanities, 16-year-old Stella Orrin shares Charlie’s views, "I wouldn’t have chosen this GCSE as it’s too specific and ignores the sides of the climate crisis, which I feel most strongly about.

“I can say for certain that most of the people around me would do the same - to us, it seems like an extension of GCSE Geography, only with the human element omitted.”

Stella points out that stretched local authority budgets mean that the qualification will likely remain exclusive to the ranks of private school students, barring those in state-funded schools like her from taking part.

“It is an almost elitist idea and topic. Not everyone will have been able to access the subject matter before being offered it, and schools are not equipped to deliver it. This may discourage people from learning about the topic of the climate crisis at all!”

Most - though not all - GCSEs are in subjects such as English or Religious Studies, which students would have been exposed to for at least five years before sitting their exams.

However, the Natural History qualification would only be introduced to pupils just under two years before they would have to sit their final exams in it.

There are limited opportunities to access nature for those from lower socioeconomic backgrounds or living in inner-city areas, posing disadvantages to their performance that their wealthier or countryside counterparts wouldn’t have to face. There is only so much that people can learn about organisms from books, particularly in an observation-based subject.

We need climate justice education rooted deep into all our subjects across the curriculum because we will all be impacted by the climate crisis.

“We need climate justice education rooted deep into all our subjects across the curriculum because we will all be impacted by the climate crisis,” adds Stella.

“I’m extremely worried about the climate crisis, and this all seems like an escape route for the government to get away with not doing enough on climate. It makes me more anxious knowing that this GCSE will let them get away with even more inaction,” she continues.

An opportunity rather than a tool for exclusion

However, this view isn’t shared by all students. Other students, such as year 12 student Finch see the course as an access opportunity rather than a mechanism for exclusion.

“I sincerely wish that the Natural History GCSE had been available to me,” they explain.

“Access to this GCSE would have meant that my class in urban London would have been able to explore and learn about the natural world - information which I feel we weren’t exposed to. Students deserve to learn about their interests - I’m glad it is now an option.”

While the Department for Education has said that the course will include fieldwork, it is not clear what this will actually entail.

Currently, GCSE Geography has a single visit to the countryside for fieldwork purposes - if the Natural History GCSE follows suit then it arguably won’t be doing much work towards increasing access to nature for students in urban schools.

“‘I support this GCSE fully, but hope that it will ensure all students are given access to the full world of natural history. From what I have seen, it won’t go far enough to properly teach students about the political and economic systems that caused the climate crisis,” Finch continues.

Rue Millwood, a 16-year-old climate activist, builds on this point.

They feel the qualification risks not being comprehensive enough, telling Euronews Green, “This subject just won’t capture the imagination and skills of students in this country.

Focusing on natural history, much of which is already covered in biology and geography suggests that the climate crisis is merely a scientific matter.

“Focusing on natural history, much of which is already covered in biology and geography suggests that the climate crisis is merely a scientific matter. It will make students like me who don’t want to focus on science grow up feeling like the climate crisis is not relevant to them, when in fact all of us will be impacted by it in a myriad of ways.”

Rue outlines that what students would prefer is “clear, honest information about the climate crisis in all areas of the curriculum, both academic and vocational, implemented in all schools and with funding for additional teacher training.”

“We’re not asking for the Earth - we just want to be taught the full truth about it without having to be from a certain town, school or social class,” Rue concludes.