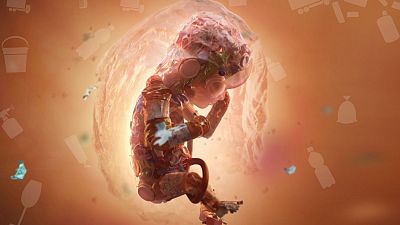 Large polystyrene particles - around the size of a cloud or fog droplet at 10 micrometres - can make their way into the placenta, according to scientists at Utrecht University.

Presenting her research at the Plastic Health Summit in Amsterdam last week, lead scientist Hanna Dusza said more work is urgently needed to determine what effect the tiny pieces of plastic are having on foetal health.

Microplastics are tiny plastic particles less than 5 millimetres in size. They are found in numerous products - including toothpaste, shampoo and drug capsules - and created when bigger plastic objects break down.

The research also found that plastic particles can become a vector for other chemicals, effectively carrying them into the womb.

This could expose the foetus to a raft of dangerous pollutants, including PCBs: a group of manmade chemicals once widely used in industrial processes, and still contaminating the environment even after they were banned in Europe in the 1980s.

PCBs have been shown to cause cancer in animals.

Could microplastics have a similar impact to air pollution?

The placenta is a temporary organ that develops in the uterus during pregnancy, and enables oxygen and nutrients to pass from the mother’s blood to the baby through the umbilical cord.

Scientists have already found that air pollution particles breathed in by the mother can penetrate the placenta during these vital exchanges, leading to premature births, low birth weights and lifelong health conditions for newborns in some cases.

As Dusza, an environmental toxicologist explains, “Recent studies have shown that microplastics are also detected in the placenta, though their effects are unclear.

“Our research shows that plastic particles of different sizes are efficiently taken up by placenta cells, where they may exert subtle effects on endocrine function.” This function of the placenta is to produce hormones which control the foetus’s growth.

Dusza has developed a new method for the detection of endocrine-disrupting chemicals in the human amniotic fluid.

The dangerous effects of plasticising chemicals on reproduction

The Summit, organised by NGO Plastic Soup Foundation, also heard from Professor Patricia Hunt of Washington State University in the US.

When Prof. Hunt accidentally exposed her laboratory mice to BPA, an industrial chemical, in the late nineties, her focus was drawn to the effects of common environmental contaminants on reproduction.

On Thursday she revealed that endocrine-disrupting chemicals in microplastics have the potential to harm the foetuses of pregnant mice.

“Chemicals used in plastics not only have the potential to harm our fertility, but also to affect future generations,” she said.

“Linking maternal and foetal exposure to birth outcomes, development, and adult disease would convince even persistent doubters of the harmful effects of plasticising chemicals.

“But we don’t have the luxury of time. We must put faith in experimental evidence and ensure that our estimates of human exposure are accurate.”

How to avoid ingesting microplastics

Microplastics are everywhere - from the bottom of the ocean to the shellfish we eat, and Arctic snow to the beers we drink - so it’s impossible to avoid them altogether.

But there are things you can do to limit your exposure while at home, such as wearing more clothes made of natural fibres. That’s because synthetic garments shed microfibres - which you can also tackle with a washing machine filter.

Naturally, many of the recommended tips for filtering out microplastics from your life also involve cutting down on single-use plastics like water bottles, tea bags lined with plastics, take-away cups and plastic-packaged ready meals.

A non-plastic kettle may be worth investing in too - especially for cleaning baby bottles, researchers at Trinity College Dublin have suggested.