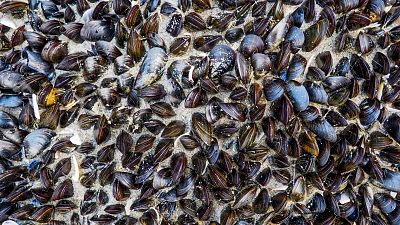 The tiny ocean animals could filter and repackage 25 per cent of the ocean's microplastics   -   Copyright  Peter Secan / Unsplash
By Shannon McDonagh  •  Updated: 06/08/2021

Mussel poo could be the secret weapon in the fight to clean the oceans of harmful microplastics.

A unique project found that the molluscs are able to turn the plastic particles into faeces pellets that float to the water’s surface, making them much easier to collect and remove from the sea.

The experiment, done by the UK’s Plymouth Marine Laboratory, found that a cluster of 300 mussels could filter 250,000 pieces of microplastics an hour. Luckily, these are not the commonly eaten variety of mussels.

“This has been a really exciting experiment because we always hoped that mussels would have the capacity to filter out microplastics, but they do it really well, and they do it without harming themselves,” says Professor Pennie Lindeque, Head of Marine Ecology and Biodiversity at PML.

It’s a promising start to address the estimated 14 million tons of the material that sit on our entire ocean floor.

Our researchers have been looking at how mussels might be able to play a part in helping to remove #microplastics from the ocean, with funding from #PlanPlastic@waitrose@hubbubUK

The mussels were first tested in a laboratory flow tank that replicates the conditions of the sea. They were fed algae, their natural food source, along with frequent microplastics.

These conditions allowed for the mussels to take the microplastics and condense them into “biodeposits.” These are easy to distinguish and gather in order to keep the water clean.

It was established that just one square metre of mussel bed can filter an enormous 150,000 litres of water per day.

This was scaled up using different mathematical models to find a solution that achieved the highest disposal of microplastics without inhibiting the mussel’s ability to grow and thrive.

Computer modelling suggests mussels could one day be responsible for filtering 25 per cent of microplastics in the water that surrounds them.

“We’re really grateful to Waitrose for the funding because it has allowed us to investigate something where we had an idea, and it’s given us the time to know whether it’s a good idea,” Professor Lindeque went on to say.

“The next steps now are working out how to deploy it in the natural environment, but we’re getting close to that.”

But what about the mussels we eat?

The team have now set up a test bioreef in the Plymouth Marina as part of a series of real-world trials.

They are clear on two things - the “repackaging” of plastic materials causes no harm to the mussels, nor are these the same mussels you’d expect to find in your nearest seafood restaurant.

Mussels that are farmed for food are placed in areas of low water pollution and flushed with clean water to remove any toxins before the distribution process. The bioreefs in place to remove microplastics contain mussels that will never be used for human consumption.

A single marine mussel can live for up to 70 years in good conditions, according to the Centre for Biological Diversity. Our oceans contain 1,000 different species that require plentiful sources of food and clean water to battle against population declines.

This life span, along with the animal’s low-maintenance way of life, could become a safety net that protects thousands of other ocean species from plastic pollution.

Professor Lindeque believes this is just the start.

“We’re hoping that we can put mussels in cages with nets underneath to collect the biodeposits near point sources, so maybe in marinas or near waste water treatment works, to really start having an impact and remove microplastics from the natural environment before they start dispersing and causing a problem for so many marine animals.”