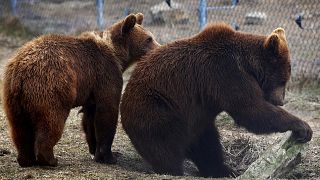 Bears evacuated from Kyiv Zoo look out of their enclosure at the bear sanctuary on the outskirts of Lviv, Ukraine   -   Copyright  REUTERS
By Ben Anthony Horton  with Reuters Connect  •  Updated: 10/03/2022

Seven bears have been evacuated from a Ukrainian animal shelter near Kyiv as Russian attacks on the city intensify.

On 5 March, the White Rock Shelter asked for emergency help to evacuate its resident bears as the area became increasingly dangerous. Plans were immediately set in motion, with Bear Sanctuary Domazhyr in Western Ukraine offering to house the animals for the duration of the conflict.

Four Paws, the animal welfare charity behind the sanctuary, says that five adult bears and two cubs arrived safely at the facility after a 24-hour trip.

"Given the circumstances, the bears look fine and they are healthy," says Michael Kellner, international press officer at Four Paws.

"We have prepared everything for their arrival and they will receive the care that they need by our experienced team."

During the drive, the truck had to stop multiple times due to road checkpoints, tank convoys and enemy shelling.

Domazhyr village lies on the outskirts of Lviv, a small city near the Polish border. The city is currently calmer than many others in Ukraine, with no direct missile strikes having been reported.

Staff at Bear Sanctuary Domazhyr remain on-site to care for its 29 bears during the conflict. The sanctuary says it is evaluating the situation and planning further steps to support other animals in the besieged country.

Watch the video above to see the bears for yourself.