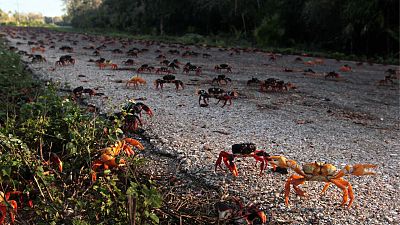 Crabs invade the beaches of Cuba after a pandemic-induced recovery.   -   Copyright  Reuters
By Euronews  with Reuters  •  Updated: 25/03/2022

Migrating crabs around Cuba's Bay of Pigs have emerged early and in unprecedented swarms, according to local residents.

The animals are now flocking to beaches in the area, following two years of the pandemic that allowed them to cross normally trafficked roadways and reproduce in peace.

After the island's spring rains begin, millions of red, yellow and black landcrabs emerge at dawn and dusk and march from the forest across the road and down to the bay on Cuba's southern coast to spawn in the sea.

Most years, untold thousands fall victim to the tires of passing motorists. But for the past two years, the crabs have had the place to themselves, residents say, boosting their size and numbers.

"There was very little traffic, and very little tourism," says Angel Iraola, 46, who guards a parking lot off the winding, crab-infested road that tracks the bay. "There are more crabs now than there have been in many years."

There are more crabs now than there have been in many years.

Scientists have yet to confirm initial reports of a pandemic-induced recovery, but Reinaldo Santana Aguilar, a scientist with Cuba's environment ministry, says the onslaught of crabs this year speaks for itself.

"We have observed that the migrations have had an unusually high density of crabs," Aguilar told Reuters. "It is very likely that the crab populations have recovered and that is why there is such a strong migration now."

Tourists got quite a surprise

Tourists whose stay overlapped with a cold front that brought early spring rains to the region were treated to one of the world's most spectacular, and largely intact, animal migrations.

At dawn and dusk the multi-coloured crabs emerge with spawning on the mind, scuttling sideways toward the turquoise sea, climbing up house walls and carpeting the roughly paved coastal road.

"I have travelled quite a bit, but it is only here in Cuba that I have seen this," said 36-year-old Italian tourist Dayana Zanona. "Their colours are so strong."

For the crabs, however, the post-pandemic return of tourists, and the cars, buses and vans in which they travel, is a rude awakening.

As vehicles speed by, some swerving to avoid the 10-legged crustaceans, their rigid, fire-red carapaces crunch and crackle. The stench of crushed crab fills the air and their sharp shells often puncture car tires.

We use the mop to scare off the crabs so as not to kill them. They are animals.

Giordanis Durán, 43, was surprised by the huge numbers of crabs this year, but came prepared.

With a homemade mop, he shooed crabs from the road ahead of his car as his family made their way to a local waterfront hangout to celebrate a birthday.

"We use the mop to scare off the crabs so as not to kill them. They are animals," Duran said, who noted that the tactic also helps ward off flat tires.

The Bay of Pigs, where in 1961 US-backed Cuban exiles landed in a failed attempt to end Fidel Castro's revolution, lies within a national park where 80 per cent of Cuba's endemic birds, along with crocodiles and other wildlife, can be observed.

Watch the video above to see the crabs in action.