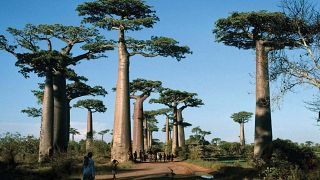 Fruits and seeds of several Baobabs in Madagascar could be a source of B vitamins.   -   Copyright  Phillip Cribb © RBG Kew
By Giulia Carbonaro  •  Updated: 24/02/2022

Feeling tired, losing your appetite, forgetting things. The symptoms of vitamin B deficiency can be quite sneaky, but its impact is really harmful. Eventually, it can cause anaemia, neurological problems, and blood diseases.

Vitamin B deficiency affects thousands of people around the world in both developed and developing countries, but it’s an especially severe problem in India, Mexico, Central and Latin America, and parts of Africa.

And yet a solution could be hidden right in front of us, scientists have revealed.

The discovery of vitamin B power-plants

Scientists from the iconic Royal Botanic Gardens, Kew, together with UK and US ecologists, conservationists and food researchers, have identified 1,044 plant species that could potentially provide precious vitamin B to thousands of malnourished people.

The study, published in Nature Plants, examined nearly 300 plant species known as sources of vitamin B and already commercially produced and consumed, and discovered that closely related species have similar nutritional values too.

With this in mind, scientists realised that there must be over 1,000 edible plants, which can provide six different B vitamins (B1, B2, B3, B5, B6 and B9) but had not yet been documented as vitamin B sources.

Good news for vegetarians and vegans

Vitamin B deficiency is considered to be more common in people who follow a vegetarian or vegan diet. The most popular sources of B vitamins are beef, poultry and seafood, as well as other animal products like eggs.

Having a plant-based alternative would mean vegans could follow a well-balanced diet that respects their values, without having to take vitamin B supplements.

"If we think about a more sustainable future, and if we want to switch to a more sustainable diet, we might need to diversify a bit more our potential source of vitamin B," Dr Samuel Pironon, Researcher in Kew’s Ecosystem Stewardship Team and co-author of the paper, tells Euronews Green.

What are these plants?

Vigna, Parkia and Vicia. You might not have heard of these plant species’ scientific names, but you will have certainly eaten some of them. These plant groups produce beans, peas and peanuts which are full of B-vitamins.

Then there's Digitaria, a grass species which can be found in the savannas of West Africa. Scientists think it will be a major food source in the future if temperatures keep rising, as it’s very resilient to hot and dry climates.

Several kinds of oats could provide vitamin B1 too, while the fruits and seeds of some Baobabs in Madagascar could be a good source of B9.

Among the fruit, there's also a wild species of Durian which can be found in its native Borneo, Indonesia, but is also cultivated in Malaysia and Australia. If the taste of Durian is not to your liking, you’ll be happy to know this variation has a much blander flavour.

Most of these plants are underused as food sources, say the scientists behind the study. Some are actually disappearing: of the 1,044 species identified, 63 are threatened in their natural environment.

Among the plants identified as nutritionally rich, the number facing extinction could be higher still, as the conservation status of 358 of them have yet to be assessed.

"We don't know if they're threatened or not in the wild, that is a big issue," says Pironon. "There could be many in danger, but we don’t have the information to act."

Baobabs, for example, are used for charcoal and timber and are threatened in their natural habitats by mining and agriculture.

"We need to pay more attention to the incredible diversity of edible plants to better understand how they can contribute to human nutrition and what we need to do to preserve them for future generations," says Aoife Cantwell-Jones, PhD Researcher at Imperial College London and lead author of the paper.

"Our study represents an important step in that direction."

What problems could this solve?

"So improving long-term access to a diversity of wild and cultivated plant sources of micronutrients is key to human subsistence."

Many of these vitamin B-rich species grow in what are considered global hotspots of malnutrition, such as South-East Asia and sub-Saharan Africa.

Starting to use these plants as a reliable, natural source of vitamin B could not only help the health of future generations but also save some of these plants from the brink of extinction.

"As a conservation biologist myself, I think for a long time we’ve focused on identifying issues and problems, and there are many," says Pironon.

"But I think we're at a turning point in science, where we’re now focusing more on providing solutions to these major challenges, hunger, biodiversity loss, climate change, and this is what we’re trying to do with our study here.

"By understanding that our interaction with plants is useful to humans, we can take a step towards addressing these challenges."