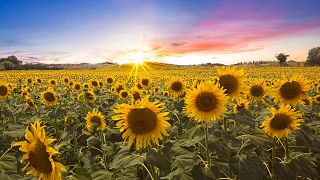 A farm in Queensland, Australia, could be home to the first flower in the world planted by a drone.

It's part of an experiment in which drone pilot and farmer Roger Woods deposits tens of thousands of sunflowers using a single, aerial drone.

The unmanned aircraft distributes 45,000 seeds per hectare with the aim of sprouting 30,000 plants.

"This sunflower crop, to the best of our knowledge, is the first sunflower crop planted entirely by drone. So a big agricultural drone that we use commercially, spreads the seeds," says Woods.

The technique is already used for crops like barley, lucerne (alfalfa) and wheat.

But many were sceptical it would work for sunflowers.

"Sunflowers need to have fairly consistent spacing to grow correctly, and they also get incorporated quite accurately so these are some of the challenges that we had to overcome while planting them by drone," explains Woods.

The experiment is now in full bloom, drawing in tourists to learn more about modern, less invasive farming practices.

The experiment is now in full bloom, drawing in tourists from all over to enjoy the photo opportunity and learn more about modern, non-invasive farming practices.

The farmers say the technique is less invasive than traditional planting methods as it creates less soil disturbance and they're hopeful other growers will soon adopt the technology.

The many uses of drones in saving the environment

Using drones in modern farming is becoming a common practice more and more, as the technology carries a lot of potential when it comes to saving the environment.

Euronews Green recently reported about the Australian startup AirSeed Technology, which is fighting deforestation by utilising drones and artificial intelligence.

Drones also help scientists save endangered species such as sea turtles - and came in handy after the Australian bushfires in 2020 in saving koalas.

Watch the video above to see how the drone works.