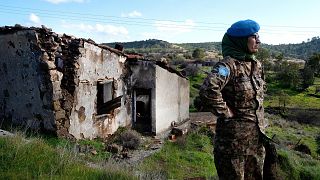 In the long-abandoned village of Variseia in Cyprus's United Nations buffer zone, scientists from both sides of the turbulent island are hoping that a stretch of untouched land can unite a warring country.

The buffer zone - also known as the Green Line - is a demilitarised area patrolled by the United Nations Peacekeeping Force. First established in 1964 and extended in 1974 following the Turkish invasion of Cyprus, the strip of uninhabited farmland covers some three per cent of the island - spanning an area of 346 square kilometres.

Its purpose is simple: to separate the opposing Greek and Turkish forces and prevent the reignition of hostilities between the island’s warring parties.

But in the 66 years since its creation, another unforeseen function has taken hold - one which scientists hope may resolve the Cyprus Conflict for good.

"This part of Cyprus has been abandoned since 1974,” says Salih Gucel, director of the Institute of Environmental Sciences at Near East University.

“There was no influence from humans, so that made the habitat and plants flourish here. As a result, the animals, vegetation and other organisms living here are healthier and develop more harmoniously."

While the leaders of North and South Cyprus remain at loggerheads, this strip of untouched vegetation has helped plant the seed of cooperation between both sides.

"We realised that some parts of the buffer zone could function as biodiversity hotspots for the rest of the island, so these are areas where biodiversity flourishes, where you have healthy populations of different species,” says Iris Charalambidou, a researcher at the University of Nicosia.

"People who work in environmental issues are usually so passionate about the environment that when they meet, they talk about that, and don't bother talking about other issues,” continues Iris.

“One of the aims of our project was to get people who are interested in the environment in both communities to collaborate with each other."

This ambitious undertaking aims to unite members of the environmental community in studies focusing on the Green Line’s process of rewilding - a result of limited human activity in the area. As a consequence, endangered flora and fauna are now flourishing in the buffer zone, while common grazing grounds are available to farmers on both sides of the divide.

"We are looking at environmental issues here in Cyprus, and we are seeing opportunities to help build peace between two divided communities,” says Aleem Siddique, spokesman for the UN peacekeeping force in Cyprus.

“We know from our work with young people on the island that they have a shared concern for the environment. We are bringing these communities together to address common environmental concerns inside the buffer zone."

For now, the process is a slow one, but those involved in the study remain hopeful that a mutual interest in Cyprus’ biodiversity could pave the way for peace across the conflicted Mediterranean island.

Watch the video above to see the biodiversity hotspot for yourself.