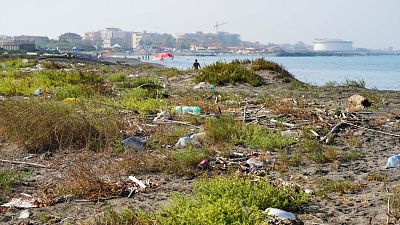 Garbage is seen along a beach at Fiumicino, near Rome.   -   Copyright  Andrew Medichini/Copyright 2020 The Associated Press. All rights reserved
By Rosie Frost  •  Updated: 30/10/2020

More than 200,000 tonnes of plastics are being leaked into the Mediterranean Sea every year, according to a new report from the International Union for the Conservation of Nature (IUCN).

Microplastics make up 94 per cent of this waste with over half coming from the dust given off when tyres wear down. Textile shedding makes up another third of the microplastics flowing into the sea and microbeads in cosmetics account for 12 per cent.

Of the countries that surround the basin, Egypt contributes the most plastic at around 74,000 tonnes every year, with Italy adding an estimated 34,000 tonnes and 24,000 tonnes hailing from Turkey.

The Mediterranean Sea has the highest levels of plastic pollution in the world. Many people who live in densely populated areas on the coast, and around rivers that drain into the sea, add to the problem.

According to IUCN, there could already be around 100 million tonnes of plastic polluting the region's waters.

“Marine animals can get entangled or swallow plastic waste, and ultimately end up dying from exhaustion and starvation.”

She adds that plastic waste releases chemicals, which are used to make it softer or reduce the risk of them catching fire, into the water. These chemicals can be harmful to both human health and ecosystems, “especially in a semi-closed sea such as the Mediterranean”.

“As this report makes clear, current and planned measures are not enough to reduce plastic leakage and prevent these impacts,” says Epps.

In order to reduce the level of plastic leakage in the next 20 years, there needs to be “a set of ambitious interventions,” states the report. Its authors say that the currently proposed interventions are “far from sufficient for solving the plastic crisis and restoring a healthy Mediterranean Sea.”

But a series of relatively easy to implement measures could stem the flow significantly. This includes changing how waste is collected and managed in 100 cities that surround the Mediterranean.

A global ban on plastic bags would reduce overall usage by over a million tonnes and cut leakage into the Mediterranean by 50,000 tonnes. A full ban on plastics in the region would cut it by a whole 23 per cent.

Other initiatives such as capturing plastic waste at dams in the Nile river, where much of the pollution originates, “offer great potential for recovery of floating waste”.