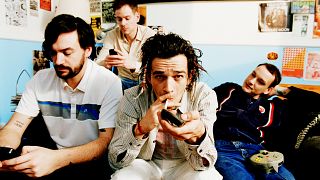 Creating a sustainable music industry is no easy feat. From world tours to plastic-filled concert venues, lighting and cameras, production and the amount of energy used to power it all, it doesn’t exactly lend itself to eco-friendly change. A handful of artists have pledged to combat climate change through limiting performance opportunities/tours, but exact commitments have been vague and unspecified.

Pop-rock band The 1975 might be the catalyst for change, however. Gradually making a name for themselves as the greenest band around, The 1975 have just announced a concrete commitment to power their next show using sustainable vegetable oil. The gig, which will take place in London’s Finsbury Park on 11th July, will use hybrid-powered generators and run on Hydrotreated Vegetable Oil (HVO).

Setting an example to artists everywhere, this will be the first time traceable, sustainably sourced HVO fuel is used to power an entire event. The concert will also be paperless, with only digital tickets available to buy online. Energy will be derived from solar panels and food vendors even plan to use a traffic light system to highlight the carbon footprint of each meal sold at the event.

“This is undoubtedly a sustainable show paving the way for others,” Melvin Benn, Managing Director at Festival Republic told Euronews Living. Having signed the Festival Vision: 2025 pledge, in line with the Paris Agreement at COP21, event organiser Festival Republic claims it is devoted to making shows more environmentally sustainable.

The 1975 eco-concert will “bring the carbon footprint down by 90%,” Benn continues, adding that he is “incredibly proud” of this achievement. “We’ve been years in the planning, pulling together the intricacies of being able to deliver this. Using traceable, sustainably sourced HVO fuel from Europe is incredibly exciting.”

Back in 2019, The 1975 worked with Greta Thunberg herself, collaborating with her on a track. Thunberg told The Guardian, “I’m grateful to get the opportunity to get my message out to a broad new audience in a new way. I think it’s great that The 1975 is so strongly engaged in the climate crisis.” The track, entitled ‘The 1975’, is the opening track on the album ‘Notes on a Conditional Form’ and proceeds go towards climate activism group Extinction Rebellion.

Is HVO vegetable oil the future of sustainable fuel?

Hydrotreated Vegetable Oil (HVO) is a fossil-free renewable diesel fuel produced by processing oils and fats. When used, it produces a 90% reduction in CO2 and is also more weather durable, working efficiently in extremely cold conditions of up to -50 C.

“HVO can be used as a good alternative to lower emissions when compared to fossil Diesel,” Floris Jousma, Clean Mobility Specialist at EAFO (European Alternative Fuels Observatory) explained to Euronews Living. It is eco-friendly because “it can be made out of used cooking oil or animal fat,” he says.

One thing to look out for though, is that some HVO is sometimes offered as a blend of fossil diesel and HVO – “of course emissions are only truly reduced when using pure HVO,” Jousma warns. Equally, “we have to be very wary that it is not made out of palm oil, for which the jungle in South-East Asia is being cut down, this is a big threat,” he concludes.

Setting a record for the greenest concert the UK has seen to date, The 1975 will also plant trees across the globe for every ticket sold, using the One Tree Planted initiative. Promoter Festival Republic is getting involved on a more local basis, working with surrounding boroughs Haringey, Hackney and Islington to plant 1,975 trees in urban areas in partnership with Trees for Cities.

The last wide-scale study on the carbon footprint of music performance in the UK was in 2010, conducted by Julie’s Bicycle. Ten years ago now, a total of approximately 85,000 tonnes of greenhouse gas emissions were generated from bands touring in the UK, as well as UK acts touring overseas. The 1975’s upcoming green concert will only increase awareness that performance industries can combat climate change in their own way. Organisations like Julie’s Bicycle and Staging Change are leading the charge.

“The creative community is uniquely placed to transform the conversation around climate change and translate it into action,” says Julie's Bicycle.