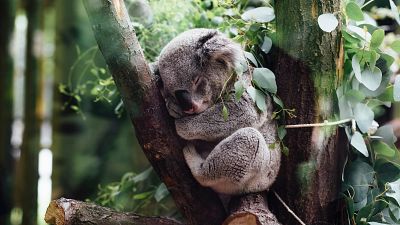 Kangaroo Island is located just off the south coast of Australia. Due to its isolated position, invasive species like foxes and rabbits were never introduced allowing native animals to flourish. According to NGO Kangaroo Island Land for Wildlife the area supports over 200 species of native fauna.

“The bushfires have rampaged through 210,00 hectares of land on Kangaroo Island,” explains Lisien Loan, Conservation and Wildlife Director for the Department of Environment and Water in Australia.

“There is no doubt that large numbers of koalas, particularly on Kangaroo Island have been affected, as well as kangaroos and other native species, including some that are threatened and endangered.”

A study by World Weather Attribution found that climate change had increased the risk of wildfires in Australia by “at least 30% since 1900”. Extreme high temperatures and unusually low rainfall in 2019’s fire season were found to have contributed to the severity. Such widespread damage meant that many already endangered animals were at risk of becoming extinct.

To help vulnerable animals to survive, aerial food drops have been taking place across the island. In coordination with RSPCA South Australia, the local government has been attempting to keep endangered species from starving using these drops and 83 feed stations in locations where food is scarce. The intervention is keeping the animals alive while native grasslands and forests recover.

Cameras were positioned at these stations to help conservationists estimate how many animals had survived and assess what condition they were in. While initially there were images showing them emaciated, more recent observations prove that previously threatened species are beginning to find their own sources of food again.

The organisations involved have now been able to reduce the frequency with which they are providing aid, as natural sources begin to return. This is a good sign for the future survival of biodiversity on the island.

Kangaroo Island Dunnarts, which are tiny mouse-like marsupials, were already threatened with numbers down to just a few hundred. More than 90 per cent of their habitat was lost during the fires leading some to believe they were gone forever. Camera traps have captured images of the elusive marsupials in pockets of surviving, unburnt patches. A combination of additional food and the construction of a fence to keep out feral cats has meant that these tenacious little creatures have managed to survive.

The island is also home to one of the few remaining chlamydia-free koala populations, a disease that is prevalent in those found on the mainland. About 30 koalas have been rescued and are now being transferred to parks in South Australia in an attempt to set up a disease-free population elsewhere.

Signs of recovery are still tentative, with coverings of ash preventing regeneration in some areas. Experts hope that once a significant amount of rain clears the ground, the habitat can start to recuperate and provide much-needed food and shelter for many of the island’s animals.