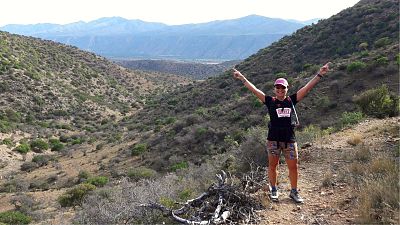 She was on the tail-end of an epic adventure, which saw her register a Guinness World Record for 101 consecutive half marathons.

Now at the finish line, she couldn’t resist the idea of doing one more.

“It was just a spur of the moment thing. And when I get an idea in my mind, there's no way failure is an option.”

This was the same sense of determination that had driven the endurance athlete’s 3-month record attempt across the game reserves of South Africa.

But it was her passion for rhino conservation that kept her going.

“It was never really about the world record,” says Jessop.

“It was about getting people to sit up and take notice. I'm putting my legs, my butt, my everything on the line to save these wonderful animals.”

Beginning on World Rhino Day 2020, Jessop ran 21.1 kilometres every day to raise awareness of the One Land Love It Foundation, a not-for-profit organisation dedicated to protecting South Africa’s endangered rhinos.

The country is home to 80 per cent of Africa’s wild rhino population, but with more than 1,000 rhinos killed each year between 2013 and 2017 alone, the population is now at a dangerous tipping point.

“There's so much more that needs to be done,” says Jessop.

“In 90% of poaching cases, they kill the animal. So now there's an animal taken out of the world that cannot reproduce.”

The gestation period of rhinos is between 15 and 18 months. Calves spend up to three years with their mothers, meaning that each rhino cow can produce one calf every four years.

This figure lies in stark contrast with the number of rhinos poached each year.

“We need to find new and innovative ways to get people invested in this problem,” continues Jessop.

“That’s why with the One Land Love It Foundation, we talk to the kids. We let the kids take the message into the homes, to the parents and to the older siblings.”

She hopes her world record will encourage people to take a stand against the dangers facing rhinos - before it’s too late.

“I'm obsessed, and I'll never not be obsessed with saving these magnificent, beautiful, iconic animals.”

Pangolin’s are the world’s most trafficked animal. But why?