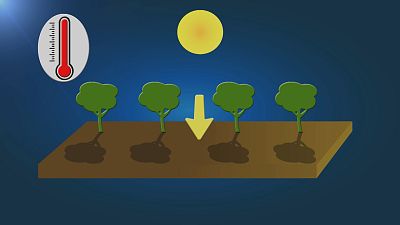 Let's start with the things that make our climate cooler.

And the first one is something extremely hot - volcanoes. Big ones, especially those in the tropics, can change our climate.

The dust they send flying into the atmosphere reflects light from the sun, reducing global temperatures.

Back in 1991 a volcano in the Philippines erupted and cooled the climate by between 0.1 and 0.2 degrees.

The thing to keep in mind about volcanoes is that the effect they have is small, and short lived.

Next up is the fine particle pollution from cars and industry. That brown-ish haze you see over the city is actually blocking out solar radiation.

The fact that there are industrial aerosol emissions means that, in fact, what is perceived as climate change is less than what it would be if there were no, or less, particulate pollution.

In fact, air pollution from humans makes the climate around half a degree (-0.5C) cooler than it would be otherwise.

So we're actually masking the effects of all our carbon dioxide and methane emissions.

“From a global warming point of view,” says Vincent-Henri Peuch from the Copernicus Atmosphere Monitoring Service. “The fact that there are industrial aerosol emissions means that, in fact, what is perceived as climate change is less than what it would be if there were no, or less, particulate pollution.”

Other things in nature can either make our climate warmer or cooler - like ice.

If there's a lot of ice covering the land or sea it reflects light into the atmosphere and cools down the planet.

If the ice melts, it reveals the dark ocean or land below, which absorbs sunlight, and warms up the planet. This is what's happening in the Arctic and Siberia in recent years.

It's all fascinating stuff, but at the end of the day, the absolute number one reason why our planet is warming every decade is us humans doing things like burning oil, gas and coal, and cutting down forests.