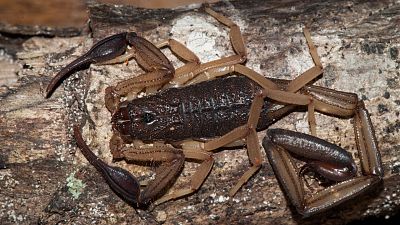 Black fat-tailed scorpions are stinging people in their homes in Egypt, after escaping during a storm.   -   Copyright  Canva
By Maeve Campbell  & AP  •  Updated: 16/11/2021

Flooding in southern Egypt has led to scorpions being forced out of their hiding places and into people’s homes. Hundreds of locals have suffered injuries as a result.

503 people are known to have been hospitalised after being stung by the creatures. Symptoms include severe pain, fever, sweating, vomiting, diarrhoea, muscle tremors, and head twitching.

Fortunately, all the patients were given anti-venom doses and discharged from hospital.

The injuries happened in the province of Aswan where downpours, hail and thunder have wreaked havoc. Local authorities have urged citizens to avoid areas where there are lots of trees or, better still, stay at home.

What are fat-tailed scorpions?

Egypt is home to fat-tailed scorpions - one of the most dangerous types in the world. They are found throughout the semi-arid and arid regions of the Middle East and Africa and can grow up to 9 cm long.

Venom from a black fat-tail can kill a human in under an hour.

#Egypt : Health official in Aswan has told BBC that the heavy thunder & hail storm there washed scorpions into the streets & people’s homes - causing 400 people to be stung - in the rains scorpions seek refuge anywhere they can… #أسوان#مِصر
pic.twitter.com/zGbWzTNMQn

What is the link between flooding and climate change?

Aswan is in the Nile Delta, an area which the Intergovernmental Panel on Climate Change (IPCC) named as one of the world’s three “extreme” vulnerability hotspots in 2018.

This means that there is no doubt that flooding is becoming more frequent due to climate change.

On this occasion, there were power outages across the province and flooded streets led to damaged houses, vehicles and farms. Three people have so far died from the extreme weather.

A spokesperson for the Egyptian Ministry, Mohamed Ghanem, told one local outlet that the heavy rainfall had turned into a “highly destructive torrent,” rushing from the mountain at 100 km/ph.