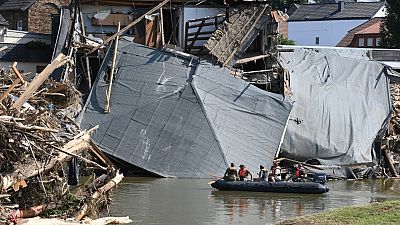 Global warming increased the likelihood and intensity of the floods that ravaged Germany and Belgium in July, claiming more than 200 lives and causing billions of euros worth of damage, according to a study by leading world scientists released on Tuesday.

The chances of such an extreme event happening in these regions has been made up to nine times more likely by warming due to human activity, the report says.

Climate change has also increased the maximum amount of rainfall in one day by between three and 19 percent, according to scientists from the World Weather Attribution (WWA), which brings together experts from various research institutes around the world.

On July 14 and 15, heavy flooding caused by torrential rains had killed at least 190 people in Germany and 38 in Belgium.

The 39 scientists gathered under the WWA banner, from Germany, Belgium, the Netherlands, Switzerland, France, the US and the UK, set out to determine to what extent human-induced climate change altered the likelihood and intensity of the heavy rainfall that caused the flooding.

They conclude that there is no doubt "human-induced climate change has increased the likelihood and intensity" of events such as July's floods happening.

The authors ran different models to estimate how warming affected the maximum volume of precipitation over a period of one or two days in the most affected regions. In the Ahr and Erft river basins in Germany and the Meuse valley in Belgium, rainfall "broke historically observed rainfall records by large margins".

The study also looked at a wider region taking in the area from the north of the Alps to the Netherlands, which was affected to a lesser extent.

The July 2021 floods were a "very extreme event", but a phenomenon that is likely to be repeated more often, their report concludes.

"We found that in the current climate, for a given location within this larger region, we can on average expect one such event every 400 years. That also means we expect such events to occur more frequently than once in 400 years within the larger Western European region," the scientists say.

"Given events like this will occur more frequently in the future, examining how vulnerability and exposure can be reduced becomes critical to reducing future impacts," it says.

For one of the report's authors, Maarten van Aalst, it is "important to know how we reduce the vulnerability to these episodes and their impacts". Because "unfortunately, people are often ready ... but for the previous disaster", the director of the Red Cross and Red Crescent Movement's Climate Centre added.

Germany will have to devote €30 billion to the reconstruction of disaster areas and the disaster has placed the climate emergency at the heart of public debate, weeks before elections at the end of September to choose Chancellor Angela Merkel's successor.

This is the second study to indicate a clear link between climate change and natural disasters -- droughts, fires or floods -- that are already being felt around the world and have multiplied this summer.

The WWA previously calculated that the "heat dome" that suffocated Canada and the American West in late June would have been "almost impossible" without the effects of climate change.

In early August, UN climate experts also sounded the alarm in a shock report, suggesting global warming was occurring even more quickly and fiercely that had been feared, threatening humanity with "unprecedented" disasters.

The study from the IPCC (Intergovernmental Panel on Climate Change) said the threshold of + 1.5 ° C -- the target not to be exceeded according to the Paris agreement -- could in fact be reached around 2030, 10 years earlier than estimated.

"All available evidence taken together... give high confidence that human-induced climate change has increased the likelihood and intensity of such an event to occur and these changes will continue in a rapidly warming climate."