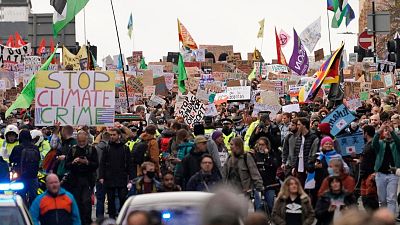 Climate protests in Glasgow were led by youth climate activists from around the world   -   Copyright  AP Photo
By Ben Anthony Horton  with AP  •  Updated: 05/11/2021

Hundreds of youth climate activists from around the world have gathered in Glasgow City Centre to maintain pressure on COP26 negotiators.

They are calling on world leaders to step up their action against the climate crisis, carrying banners with slogans reading: “I have to clear up my mess, why don’t you clear up yours?”

The protests are part of a series of demonstrations being staged around the world on Friday and Saturday to coincide with the United Nations Climate Change Conference in Scotland.

Some protestors at the Glasgow demonstration accused negotiators of “greenwashing” their failures to curb greenhouse gas emissions, while promoting policies that fail to prevent dangerous temperature rises.

For many, the conference has raised serious concerns about the absence of young people in the decision-making process.

“For young people, it’s only right if world leaders and older generations involve us because it’s our very future we are fighting for.”

This sentiment is shared by others at the COP26 protests, many of whom have travelled from around the world to convey their message to world leaders.