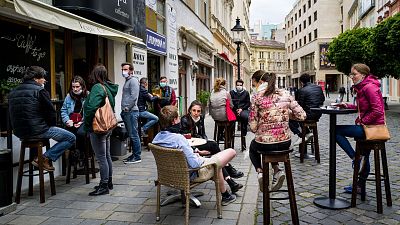 Since the summer, Slovakia has already banned many single-use plastic items like plastic plates and cutlery. And with the use of plastic packaging still on the rise, the Slovakian government is now encouraging supermarkets to replace plastic bags with compostable alternatives.

But giving up the plastic habit isn’t that easy.

"Plastics are not that bad in general,” says Tomáš Bezák, spokesperson for Lidl Slovakia. “They have their own purpose and function when selling goods - they are protecting the goods... You have to ask yourself as a retailer if everything that is packed in plastic has to be packed in plastic."

Since there’s no outright government ban on plastic bags, supermarket chains have started to offer alternatives - with success. Lidl sells eco-bags in Slovakia, reducing the use of plastic bags by 30 per cent in their stores.

"Certain supermarket chains are attempting to stand out with their ecology-related approach which, as Minister, I can only praise," says the Minister of Environment Ján Budaj.

Since Slovakia introduced a minimum price for plastic bags, their use has fallen drastically, but it is still high by European standards.

The recycling potential for plastic waste remains largely untapped in the EU - with less than 30 per cent being reused.

The recycling potential for plastic waste remains largely untapped in the EU - with less than 30 per cent being reused.

And in Slovakia, twice as much household waste ends up in landfills compared to the EU average.

"If a plastic bag ends up in residual waste it usually goes to the landfill because we are landfilling 50 per cent of our residual waste,” says Ivana Maleš from the INCIEN Institute for a Circular Economy. “And it's harming the environment by degrading to microplastics and it's harmful to the soil, the water and to the air."