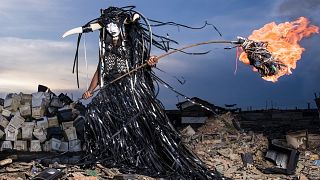 The world’s leading prize for photography, the Prix Pictet, has announced its shortlist of 13 photographers. The prize aims to draw on the power of photography to draw global attention to issues of sustainability, especially those concerning the environment.

The theme for this cycle was ‘Fire’, with all the nominated photographers producing bodies of work that addressed the theme.

“Fire has hardly been out of the news since the inferno that consumed Notre Dame in Paris in early 2019. We have seen record rainforest blazes in the Amazon, forest and bush fires in Australia and conflagrations in California. It is the fourth element. Fire destroys and it renews. Fire means survival, renewal, and economic prosperity. Yet our abuse of this most capricious of elements is the source of most of our environmental woes,” says Chair Stephen Barber.

Each cycle of the Prix Pictet tours the world and holds exhibitions in over a dozen countries annually, bringing the work of the shortlisted photographers to a wide international audience.

The winner will be announced on 15 December 2021, at the opening of the exhibition at the Victoria and Albert Museum in London. The prize is 100,000 Swiss francs (€91,000), which will be awarded to the photographer whose body of work speaks most powerfully to the theme of Fire.

Joana Hadjithomas and Khalil Joreige (Lebanon) - Born 1969 in Beirut, based in France and Lebanon

Wonder Beirut is an ongoing project based on a series of postcards from the 1960s and 1970s. The places they depict were destroyed or altered in the bombardments or subsequent reconstruction programmes. A fictional photographer character was created, who supposedly took the photographs that were used in the postcards, and then burned them himself to record the impact of street battles during the Lebanese civil wars.

Between 1997 and 2001, when Kawauchi was living alone in Tokyo and in the process of making her earliest works, she photographed fireworks every summer. Hanabi is a collection of photographs representing this body of work.

For her series Blackwater, Mann explored the great Dismal Swamp in Virginia, documenting the vast fires and thick smoke that consumed the swamp during her visit and seemed to epitomise the great fire of racial strife across America.

Fire is a series of photographic prints that began as small-scale collages featuring fragments from comic books, movie stills and images found on the internet. Fire, 2020, is a video animation made from paper cut-outs from comic book illustrations of fire. More than 1,500 photographs shown in rapid succession suggest a flip book, creating the illusion of a flickering fire.

Fabrice Monteiro (Belgium) - Born 1972 in Belgium, based in Dakar, Senegal

The Prophecy began in 2013 when Moneteiro returned to Africa after several years and discovered that devastating pollution had overtaken the continent. The series was based on nine environmental problems in Senegal, including forest fires, plastic waste and oil spills, and was gradually expanded to address worldwide pollution. This theme is personified in the photos of various figures who were inspired by West African masquerades and animism.

The presence of fire is indicated by smoke even if it remains unseen. Using found images in newspapers or the internet, Oppenheim ‘reprocesses’ the photographs in the darkroom, using the light of a match to expose the negative.

Rippey’s series Immolation began in 2010 with a series of artist’s books made from images of fire collected in magazines, newspapers and the internet: juxtaposing images of volcanoes and people set on fire (lynchings in Mexico), throwing fire (Palestinians) or people setting themselves on fire in acts of desperation. To make the collages, Rippey transfers photocopies to Japanese papers using solvent and an etching press.

LA Fires is a series of photographs selected from Ruwedel’s four-part, in-progress project titled “Los Angeles: Landscapes of Four Ecologies”. The photographs document the La Tuna fire in 2017, considered to be the largest fire in the history of the city.

Series: Burns Capital of the World, 2013

Burns Capital of the World documents young victims recovering from severe burns in India. Despite over six million people being burnt every year, India has very few burns facilities at clinics and hospitals and the best of these are very expensive.

In The Wake is a series of portraits set within a landscape on fire. With all historic and geographic markers removed from each image, the bodies in the photographs are submerged into the landscape and removed from the confines of their social reality.

Matter / Burn Out documents the burning of Yokota’s large-scale installation of photographic prints, titled ‘Matter’, at Aichi Triennial held in August 2016. This ‘burn out’ process was documented in 4,000 photographs, whereby the data was processed, manipulated and revived to form the new work titled Matter / Burn Out.

These jaw-dropping photos of the Milky Way defy light pollution

Enjoy the best photography of Europe in the snow