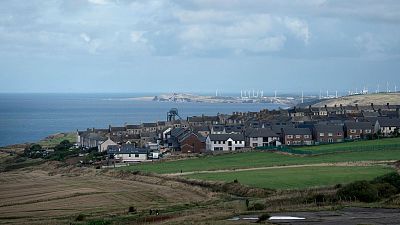 At least 40 new fossil fuel projects are in the UK’s pipeline, a new report has revealed days before the country hosts COP26.

Plans for oil fields, coal mines and gas deposits are being entertained by the British government, despite its stated target to “keep 1.5 alive”, referring to the need to stop global temperatures exceeding pre-industrial levels by a disastrous amount.

If approved, these projects could emit 1.3 billion tonnes of greenhouse gases into the atmosphere, according to new analysis by Friends of the Earth and the New Economics Foundation think tank. That’s almost three times the annual emissions of the whole of the UK. .

With the Glasgow summit starting on Sunday, the UK’s climate commitments have come under increasing scrutiny from the public.

A number of the extractive projects proposed by energy companies are already well-known to campaigners, including the Cambo oilfield off the coast of Shetland, and a deep coal mine in Cumbria - which would be the UK’s first for 30 years.

The government is yet to make a decision on either. But with the International Energy Agency (IEA) stating that sticking to 1.5C means not opening any new fossil-fuel-releasing sites, the companies are in a race against time as they seek approval by 2025, industry data shows.

“It’s going to be an embarrassing UN climate conference for the Prime Minister if he doesn’t end support for new fossil fuel extraction projects, here and elsewhere, immediately” says Friends of the Earth campaigner Danny Gross.

“The UK can’t sit on its high horse demanding other countries reduce emissions without doing the right thing first.”

What fossil fuel projects are being proposed?

The Cumbria coal mine, pursued by West Cumbria Mining - a company ultimately owned in the Cayman Islands - and Cambo, where Shell wants to drill, are two of the most high-profile plans.

Together with an oil field in Surrey, they have all been threatened by or are embroiled in legal action, but are still rumbling on.

However these are only the “tip of the iceberg,” writes senior researcher at the NEF Rebekah Diski. “Beneath them, lie a whole pipeline of prospective coal, oil and gas developments that will sink the UK’s climate efforts unless the government urgently changes direction.”

In total, companies are seeking or expected to seek imminent approval for 30 offshore oil and gas projects, seven onshore ones and three coal mines.

Beyond UK shores, the government is still supporting fossil fuel projects abroad - including a massive gas works in Mozambique to which it recently pledged $1.15 billion.. In protest against this project - which is estimated to rival the annual emissions of the whole African continent during its lifecycle - Friends of the Earth has issued a fresh legal challenge.

The Mozambique project was supported by ‘export finance’ in July 2020 under the previous policy and the government says it is now contractually committed.

How does this compare to other European countries?

But how does its domestic record compare? The new report accuses the UK of lagging behind other nations like Denmark and Spain when it comes to banning new exploration for dirty fuels.

Earlier this year, Greenland banned all new oil exploration despite its rich underground resources as “the price of extraction was too high”. Ireland also committed to keeping oil and gas in the ground, while France passed a law to ban the production of these fuels by 2040.

Germany has Europe’s largest fleet of coal-fired power stations, which it has agreed to phase out by 2038.

The need for a just transition

In response to the findings, a UK government spokesperson said “no other significant oil and gas producing nation has gone as far as the UK in supporting the sector's gradual transition to a low carbon future, as demonstrated by our North Sea Transition Deal.”

Under this deal, the offshore oil and gas industry is committed to reducing production emissions by 50 per cent by 2030.

“What we cannot have is a cliff-edge where oil and gas are abandoned overnight. If we stopped producing gas, this would put energy security, British jobs and industries at risk, and we would be even more dependent on foreign imports,” they added.

The NEF and Friends of the Earth stressed the need for the UK to ensure a just transition for workers by creating good, green jobs. They said the mistakes of the past must not be repeated, referring to the notoriously “unjust” transition that accompanied the closure of the country’s coal pits in the 20th century