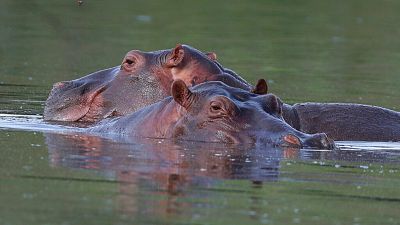 Hippos float in the lake at Hacienda Napoles Park, once the private estate of drug kingpin Pablo Escobar who decades ago imported three female hippos and one male.   -   Copyright  Fernando Vergara/AP Photo
By Rosie Frost  •  Updated: 22/10/2021

After Pablo Escobar’s death in 1993, illegally imported animals at his ranch in Colombia were shipped off to other zoos. All except for four hippos that authorities deemed too difficult to round up.

They were allowed to stay on the land but soon escaped to an area around the Magdelena River. Since then their numbers have increased to around 100.

As part of a battle to save these so-called “cocaine hippos” from being culled, the animals have become the first non-human creatures to be legally considered people by US courts.

Authorities in Colombia have been discussing killing the hippos since 2009 under the premise that they are an invasive species. They reportedly compete with local wildlife for food and pollute local waterways with their faeces.

But some scientists say that the feral mammals may actually be helping the ecosystem by replacing species lost to human activity. A study last year found that their diet and size was similar to extinct giant llamas and their semi-aquatic habit was comparable to that of another extinct mammal.

So how did the hippos get legally recognised as people?

Colombian attorney Luis Domingo Gómez Maldonado filed a lawsuit on behalf of the animals in July this year. It is intended to prevent them from being killed.

In Colombia, non-human animals do have the right to bring lawsuits that protect their interests, but someone in the US cannot be compelled to present documents to support it.

Interested parties in Colombia are however allowed to go to a US federal court to obtain documents or testimony. The Animal Defense League Fund (ADLF), an animal law advocacy group, applied on behalf of the hippos for two wildlife experts from Ohio to share their expertise about non-surgical sterilization.

They granted the application, meaning the District Court legally recognised non-human creatures as people for the first time in US history.

“The court’s order authorizing the hippos to exercise their legal right to obtain information in the United States is a critical milestone in the broader animal status fight to recognize that animals have enforceable rights,” says Stephen Wells, ADLF’s executive director.

“Animals have the right to be free from cruelty and exploitation, and the failure of US courts to recognize their rights impedes the ability to enforce existing legislative protections.”

It’s a small step in the legal case for Pablo Escobar’s unusual pets but one that could have huge implications for animal rights cases across the US. As ADLF’s managing attorney told AFP on Thursday, it is the first “concrete example” of a US court authorising animals to exercise legal rights in their own name.