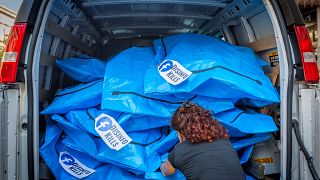 In July protesters in Washington DC demonstrated against the spread of disinformation on Facebook   -  Copyright  AP Photo
By Tom Bateman  •  Updated: 22/09/2021

Facebook has announced plans to spend $1 million (€850,000) on fact-checking disinformation about climate change.

The company said the money would provide grants to fact-checking organisations and climate experts working to combat "climate misinformation".

"For a company that makes $85 billion a year, a $1 million program that outsources the problem they’ve created shows that Facebook is not serious about solving climate disinformation," said Friends of the Earth spokesperson Michael Khoo, co-chair of the Climate Disinformation Coalition, said in a statement.

Critics from climate groups InfluenceMap and Stop Funding Heat also pointed to paid advertising by fossil fuel companies hosted on Facebook, which brought the company millions in revenue in 2020 alone.

"We reject ads when one of our independent fact-checking partners rates them as false or misleading and take action against Pages, Groups, accounts, and websites that repeatedly share content rated as false," a Facebook spokesperson told Euronews Next.

'Not a real solution'

According to Friends of the Earth, the scale of the climate disinformation challenge Facebook faces was on show as the US state of Texas suffered power blackouts during an extreme winter storm in February.

The blackouts sparked a false narrative on social media that frozen wind turbines were to blame, culminating in Texas Governor Greg Abbott claiming on national television that "this shows how the Green New Deal would be a deadly deal for the United States of America".

A report published by the environmental charity last week found that the made-up story, which blamed renewable energy sources for the power cuts, began to spread on social media before making the jump to traditional media outlets and politicians.

The report accused Facebook, Twitter and YouTube of refusing to "effectively moderate this extreme content" and found that just 0.9 per cent of Facebook interactions - meaning likes, comments and shares - with the most widely-seen messages pushing the false narrative were with posts carrying a fact-checking label.

"The case reveals how Facebook and the other platforms’ fact-checking programmes are at best ineffective, at worst a deflection from a real solution," the report said.

Facebook told Euronews Next that it was working with fact-checking organisations to counter false claims posted on its platforms.

Accounts that repeatedly post misinformation will see their posts appear less often in users' news feeds and may be stripped of the right to advertise or otherwise monetise their activities on the platform, the company said.

The FOE report also looked at an image of a helicopter de-icing a wind turbine that was widely shared alongside misleading statements across social media.

While nine of the top 10 Facebook posts featuring the image did have fact-checking labels applied, the 10 posts only received 6,293 interactions, the FOE report found.

“This report clearly states that our fact-checking partners quickly debunked false claims about the Texas storm and that we labelled ninety percent of the highest-performing posts containing a false wind turbine image," a Facebook spokesperson said in a statement responding to the FOE report.

The spokesperson added that examples of posts without fact-checking labels were "simply prepositions that the organisation disagrees with".

According to InfluenceMap research released last month, 25 organisations in the oil and gas sector spent over €8 million on Facebook adverts in 2020. These adverts were seen more than 431 million times, Influence Map said.

"The company often talks about its commitment to tackling climate change, but it continues to allow its platform to be used by the fossil fuel sector to undermine science-based climate action," InfluenceMap programme manager Faye Holder said.

In response, Facebook told Euronews Next that it has rejected "multiple" pro-fossil fuel adverts for being run "without the proper political advert authorisation".

A company spokesperson said Facebook offered "an extra layer of transparency" to fossil fuel adverts it hosted by requiring them to remain in its publicly-accessible Ad Library for up to seven years.

But last month, Euronews Next found that Facebook's policies on disinformation in advertising were being inconsistently applied. A check of Facebook's Ad Library showed it was hosting paid adverts for an anti-parasitic drug falsely claimed to be a cure for COVID-19.

The drug, Ivermectin, is commonly used to de-worm horses, dogs and cattle. It is not licensed for use as a COVID treatment by authorities in the EU, UK or US.

In August, a Facebook spokesperson told Euronews Next, “We do not allow ads promoting the use of Ivermectin for the treatment of COVID-19 and have rejected these ads. We also do not allow the sale of pharmaceutical drugs on Facebook and will remove posts and ads that violate these rules".

However, at the time of publication some adverts for Ivermectin and groups relating to the drug remained online.