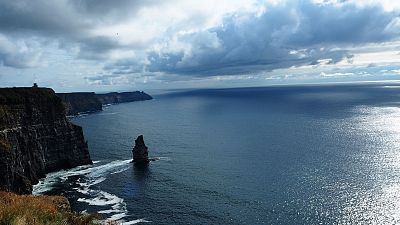 It takes only broad strokes to paint a picture of Ireland in a reader’s head: a land of intense green, wild Atlantic waves and dazzling light.

The images of Irish writers travel widely too, and their skill cuts far deeper than stereotypes of the ‘emerald isle.’ The island’s poets have conveyed its precious places in ways that make the whole world seem new, more strange and alive.

In the Northern Irish poet Michael Longley’s ‘Burren Prayer’, for instance, he gives us the rich plant life of the unique, rocky landscape in County Clare.

“I wrote that poem as a kind of prayer, even though I’m not a believer,” said Longley. “All of my nature poems are meant to be protective. Poetry is a kind of magic and you don’t know what kind of effect it’s going to have. But it does have an effect.”

Given our current relationship with the environment, the creative potential of poetry is more vital than ever.

Is poetry the best literary form for communicating climate change?

In his seminal book The Great Derangement: Climate Change and the Unthinkable, the Indian writer Amitav Ghosh questions whether fiction is intrinsically limited when it comes to writing about climate change, like extreme weather events.

The challenges of doing so, he says, “derive ultimately from the grid of literary forms and conventions that came to shape the narrative imagination in precisely that period when the accumulation of carbon in the atmosphere was rewriting the destiny of the earth.”

The novel has obviously evolved considerably over the last two centuries. But could it be that poetry - which is able to contain multiple levels of meaning - is better suited to representing complex ecological relations, taking us between times, species and countries?

Ecopoetry is a branch of nature poetry that, like ecology, concerns itself with the fragile interrelationships between living things and their environment. In other words, it reveals the world around us.

Poets put this better, of course. It can be found in Seamus Heaney’s line, “that moment when the bird sings very close / to the music of what happens.”

Not all writers who illustrate it would identify as ecopoets, but by describing plants, creatures and other life forms in fine detail, they educate and encourage us to care. Naming is knowing, and essential for acting on our myriad environmental crises.

Then there’s the special “kind of magic” that Longley alludes to. There’s no doubt that a well-crafted poem has an extra charge it’s hard to account for, especially when spoken aloud.

Paula Meehan re-cited her County Leitrim poem ‘Well’ - which tells of a nocturnal trip to a well, and possible encounter with “the spirit who guards the source / that boils deep in the belly of the earth” - as a “spell against frackers” during a 2016 lecture.

Like ‘Burren Prayer’, it has the poetic ‘tricks’ of repetition and rhyme to carry itself powerfully.

Giving voice to the non-human

One writer who took poetry to the brink of embodying the non-human was Dermot Healy. His book A Fool’s Errand charts the migration of over 3,000 barnacle geese from Greenland to his home in Sligo every October.

The 89 long sonnet sequence is presented in lines of twos and threes, mirroring the fleeting shapes of the birds’ flight.

“At half-past four
they come spilling

in twos and fours,
a swinging fifth

in a wild symmetry to make the shape of a fish,
then for one astounding moment
the lines sketch a huge bird with long thin winding wings”

Birds are an obvious voicebox for poets through the ages, and often a vehicle for human emotions. Healy went a step further in his poem ‘The Blackbird’ where he uses a kind of zoomorphic style, instead taking on the bird’s voice. When it disappears from his garden one day, the loss encompasses the bird’s perspective too: “I had a high tree, I had the warmth of a high tree, / I had a spring that emptied into memory.”

When Healy died in 2014, another Irish poet, Harry Clifton, praised his poetry as “like an eye opening / An eye, or a space / Between nature and itself.”

Contemporary poets are constantly innovating with the form, impacted by climate change themselves, and giving expression to the urgency needed to rectify it.

One of the most compelling ways this is done is not by telling people what to do, but by making the world more beautiful in all its biodiversity, and showing how intricately it includes us.

Sean Hewitt, winner of the Ginkgo Prize for ecopoetry in 2017 with his poem ‘Ilex’, links the poetry of nature with queer poetry of the body in a way that makes the connections shine.

“In this world, I believe there is nothing lost, only translated,” he writes in his 2020 book, Tongues of Fire.

Poetry cannot fix the climate crisis - people can, and the more our empathies and imaginations are stirred the better.