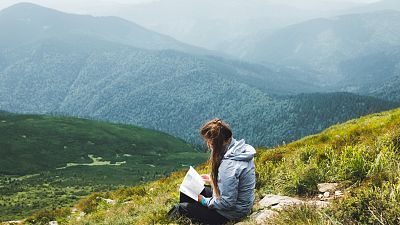 When best-selling author Catherine Bush was looking for inspiration for her latest novel – a gripping eco-thriller about climate change – someone suggested that she visit Fogo Island, the largest offshore island of Newfoundland and Labrador, in Canada.

This miniature world of ice, sea-cliff paths, friendly people and colourful houses sparked Bush’s imagination and became a major influence in her fifth novel, Blaze Island, which was published in September 2020.

“A lot of people still prefer not to think about the climate crisis,” she begins.

“It’s very painful, overwhelming and depressing. But I think there’s something very powerful about asking readers to live through a place, through a story, and through the emotional lives of the characters.”

Framed as a modern retelling of Shakespeare’s play The Tempest, Blaze Island tells the story of a climate scientist, Milan Wells, and his daughter Miranda. The pair deal with the effects of global warming together, and uncover some shocking secrets Milan has been keeping from Miranda since they moved to the island.

Cli-fi is code for Climate Fiction

The main feature of climate fiction, also known as ‘cli-fi’, is an open debate about the effects of climate change, often set in the future.

Works in the genre usually feature extreme weather events, human displacement and loss of livelihoods, as well as commentaries of the impact of global warming on the non-human, including animals, plants, oceans and, of course, ice.

Bush’s book, however, isn’t a conventional climate fiction tale, as it isn’t set in a dystopian future, but in a time very close to our own.

“I tried to amplify all the elements of our present world,” the author explains, “…where there already are ecological disasters, terrible wild fires, and so many hurricanes in the US this year that they ran out of letters to name them. It’s all around us – and my job as a fiction writer is getting people to pay attention to what’s already happening.”

Readers have started to embrace this new genre, which tries to portray the present and, at the same time, predict the future. These works are no longer relegated to the margins of literature, but instead represent some of the most famous English-language authors writing today, including Margaret Atwood, Ian McEwan, Barbara Kingsolver and Cormac McCarthy.

“We need new stories, and they have to include the climate crisis,” adds Bush, “it’s so much a part of our reality, that we would be writing bad fiction if we decided to ignore it.”

The power of stories

As the cli-fi genre becomes more and more popular, often sitting next to literary fiction in bookshops all over the world, a new study by the Yale Program on Climate Change Communications has tested the persuasive effects that climate fiction can have on its readers.

The study focused on the impact of two short stories, The Tamarisk Hunter and In-Flight Entertainment. The former, a dystopian tale by Paolo Bacigalupi of climate catastrophe, and the latter, a realist tale by Helen Simpson of climate denial in a conversation between aeroplane passengers.

Researchers found “significant positive effects” on readers’ climate change beliefs and attitudes after reading each, including that global warming will cause more natural disasters and poverty. Levels of worry, perceived importance, and the perceptions that climate change will harm readers personally, as well as future generations, were also cited as results.

Out now! BLAZE ISLAND by Catherine Bush! A searing, beautiful, climate-themed, Shakespeare-inspired novel that will change the way you see the world!#BlazeIsland#Climate#TheTempest@writercatebushhttps://t.co/OfVmP8YTAJpic.twitter.com/MfSMxVJ9qV

Like Blaze Island, these stories have the power to convince people to engage more actively with the planetary crisis, thanks to their relatable characters. “Consistent with prior research on narrative persuasion,” say the authors of the study, “we found that many of these effects are mediated by feelings of transportation by the story and identification with the characters.”

Bush stresses the importance of ‘identification’ in her novel too, adding, “climate fiction allows readers to experience something that they’ve never experienced before, and it becomes enthralling in its specificity.”

In Blaze Island, Shakespeare’s characters contribute to a metaphor of the climate crisis, she explains.

“Prospero [one of the characters of The Tempest] is a magician, he wants to control all the elements – it seemed like a fitting metaphor for what humans want to do, we want to control our environment.”

Emma Arnold, a postdoctoral researcher in human geography at the University of Oslo, is yet another believer in the persuasive influence of climate fiction. Arnold decided to create LAX LAB, an international book club using literature as a way to prompt meaningful conversations on environmental issues.

“It’s been fantastic so far,” she says about the project, which started during lockdown and already counts over 50 members from all over the world, “the conversations that are coming up are just so unexpected and fascinating.”

“Reading climate fiction is a way of understanding the moment we are in,” adds Arnold, “we are already living with the dangerous impacts of climate change. There’s a lot of grief and anxiety around it and a lot of people feel powerless.”

Rachel Fetherston, a PhD student in literary studies at Deakin University specialising in Australian eco-fiction, thinks that literature helps to further motivate readers who are already concerned about environmental issues.

“Climate fiction can instigate change, showing people relatable stories,” explains Fetherston, “it says ‘this is a family just like yours, displaced because of climate change, or whose house burnt down because of a bushfire, this could be you and your family’.”

However, she believes it’s important to bear in mind that there’s so much we still don’t know about its impact on people’s behaviour. “This research is really important, but we are only starting to understand how fiction influences readers.”

While the Yale study provides evidence that climate fiction can effectively sway readers towards believing in the science, it also shows that this persuasion has its limits.

One month on from the initial test, researchers re-contacted the study participants to assess whether the effects remained over time. They found that “the effect of reading these stories was no longer statistically significant, suggesting that the persuasive effects faded over time.”

The power of climate fiction is something which can’t successfully be measured. “It’s difficult to measure the impact of artwork and literature, because it’s so individual,” says Emma Arnold.

“For me, climate fiction offers one specific thing: hope.”