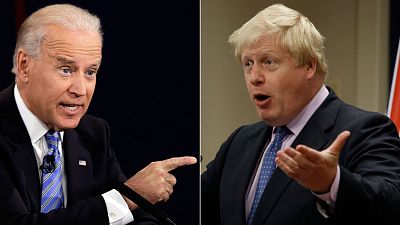 Will COP26 achieve anything meaningful in November 2021?   -   Copyright  AP Photo
The opinions expressed in this article are those of the author and do not represent in any way the editorial position of Euronews.
By Rupert Read  •  Updated: 01/11/2021

Rupert Read is a professor at the University of East Anglia in Norwich, UK, and the author of several books. In this article, he argues that our political leaders can’t be relied upon to deliver at COP26, and inevitably change will be up to the people.

All eyes are on the world’s politicians. With expectations so high though, can our political leaders face up to their responsibilities? Or will their failure cause more people to wake up and take action on their own?

Even if a poor outcome at COP26 acts as a catalyst, it is still far from ideal. But that’s what I am suggesting: that a bad outcome from COP26 is the best we can hope for.

The alternative is a truly terrible agreement, or no agreement at all. This is a distinct possibility given the current crisis with soaring energy prices, which is already raising questions about the EU’s climate plans.

Add to this the suffering of Majority World countries, due to the failure of the rich nations to pay them what they are owed in both climate and adaptation finance. And the circumstances are looking bleak.

I think the defining moment will come at the end of the COP26 conference. When the world sees how badly our governments have failed us. And more people understand there is no cavalry riding to our rescue. This will be a historic moment for us all.

When more of the world’s citizens wake up to the fact that the unprecedented floods, fires and crop failures are only going to get worse. That the increasingly dangerous weather patterns are only going to spiral. Only then will people rise up, take charge and make change possible.

And while I will make good use of my official badge at the COP Conference, what I am really going there to witness is the key moment when we say ‘enough is enough’.

Because it’s not like governments haven’t had time. In fact, they’ve had 25 chances to get this right and still failed to do so.

While the climate agreement reached in Paris in 2015 was diplomatically impressive and symbolic in finally acknowledging the trouble we are in, little has been done since to transform the system. And that’s why I believe this time will be no different.

The agreed goal was to stop the world’s average temperature from rising more than two degrees, or ideally 1.5C.

However, a report by the independent policy institute, Chatham House, has now concluded that if emissions follow the trajectory set by current Nationally Determined Contributions (NDCs), “there is a less than 5 per cent chance of keeping temperatures well below 2C above pre-industrial levels, and less than 1 per cent chance of reaching the 1.5C target set by the 2015 Paris Agreement.”

Let’s be clear, a rise of 1.5C is generally seen as the most humanity can cope with without suffering widespread economic and social upheaval. So what would 2 degrees be like? Well, you’ve seen what’s happening already, at just 1 degree.

From the recent unprecedented floods in Germany and Belgium, to the ring of fire around the Mediterranean. And that’s just in the last couple of months.

The alarm bells aren’t just ringing, they are deafening

While Brussels unveiled a raft of measures earlier this year in its ‘Fit for 55’ package. Aimed at putting the European Union on track to meet its 2030 goal of reducing emissions by 55 per cent from 1990 levels, a new report estimates that at the current pace, it will miss this by 21 years.

The study, involving Europe’s biggest utility company, Enel, concludes that without massive new measures and investment, the target won’t be reached until 2051.

We can’t afford to delay.

Politicians have patted themselves on the back too many times now and proved entirely ineffective.

There’s no more time for halfhearted deals that look good on paper. Politicians have patted themselves on the back too many times now and proved entirely ineffective.

So perhaps, on second thoughts, the optimal outcome in Glasgow would be no agreement at all.

If our so-called leaders are unable to pretend that they’ve come up with something world-saving - and they certainly won’t be able to pretend if there is no binding agreement.

Then we citizens of the world will finally know the truth: that it’s up to us now. Us the people.