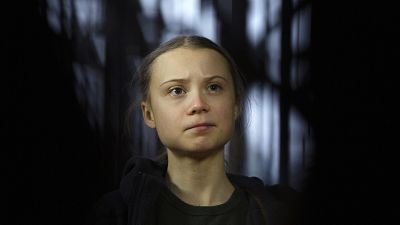 Climate activists are planning an international protest on Friday with 472 protests planned in Germany alone. The climate has consistently been cited by voters as the top election issue.

"We want to today take a strong stance in favour of climate protection and also motivate people that when they go to cast their vote that they also consider climate an important issue," Lisa Göldner, a climate and energy campaigner for Greenpeace Germany, told Euronews.

"It’s about sending a strong message to the future govt that we expect ambitious climate politics and it’s also about motivating people who are still uncertain who to vote for," she said. Greenpeace will be joining the climate protests in Germany.

Climate activists have criticised German political parties for their political platforms, stating that the programmes do not go far enough and are not sufficient to reduce warming to 1.5 degrees Celsius.

"This election campaign gave me no hope that the crisis would be seen as non-partisan for what it is," wrote Luisa Neubauer, a German climate activist, on social media. "What gives me hope are the people who take the warnings seriously."

A recent report from the German Institute for Economic Research found that no election programme "provides sufficiently coherent concepts to fully achieve" the emissions reductions laid out in a 2019 German law.

Greenpeace Germany says the German protection act is not even compatible with the goals set out in the Paris agreement to limit global warming to 1.5 degrees Celsius.

An International Panel on Climate Change report released in August warned that limiting warming to the Paris goals would be "beyond reach" without rapid and large scale reductions to greenhouse gas emissions.

The Fridays for Future protest comes a little over a month ahead of the United Nations' climate change conference in Glasgow. Activists are trying to put pressure on world leaders to agree to more drastic changes to limit warming.

Berlin has also been the location of a weeks-long hunger strike by a group of climate activists who are demanding that Germany's chancellor candidates meet with them.

'We need to be whipped into action': Draghi reacts to Greta speech