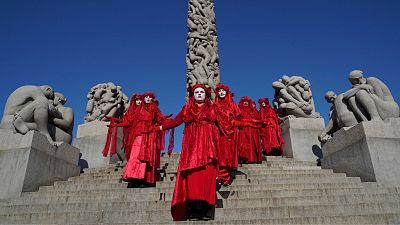 A Red Rebels brigade of the XR-Nordic Rebellion group stage a protest for the climate and against oil extraction in Norway in the Vigeland Park in Oslo on August 23, 2021.   -   Copyright  AFP
By Jonny Walfisz  •  Updated: 14/09/2021

Norway’s new left-wing coalition government may not be leading the country away from oil production as soon as some parties’ election campaigns wanted.

Norway’s left-wing opposition parties have won the country’s general election. As the centre-right government cedes the victory, coalition talks between the left-wing parties will now focus on forming a government. At the heart of these talks will be future of the country’s oil industry.

Prime Minister Erna Soldberg conceded the election after eight years in power for a conservative-led coalition. The Labour Party and its two allies - The Socialist Left and the Centre Party - will now hold a comfortable majority over the current government if they can form a coalition.

The left-wing coalition, led by the Labour Party’s Jonas Gahr Støre, has a significant amount of the 169-seat Stortinget assembly.

Despite its importance to Norway’s economy, many of the Labour Party’s potential coalition partners have signalled that they want to drastically change the country’s relationship with oil.

Greens miss out on election successes

Despite being the party with the greatest anti-oil platform, the Greens did not succeed as hoped in the election.

Throughout the election, the Green Party stated that they wanted to end Norway’s oil industry by 2035. The viewpoint wasn’t unpopular, with polls finding 35 per cent of Norwegians in favour of removing oil from the country’s production.

“Oil has its place in the museum,” Ulrikke Torgersen, the Green candidate for Stavanger, the central hub of the country’s oil industry, told AFP.

The election looked promising for the Green Party. The UN’s Intergovernmental Panel on Climate Change (IPCC) report earlier this year, warning of the devastating effect of climate change, led to the party’s 2035 promise and saw a surge in party membership by nearly a third.

Unfortunately for them, this popularity did not translate into election success and the Green Party is unlikely to be part of the eventual coalition government formed. The Party is expected to pick up just three seats of the 169-seat Stortinget assembly.

Without the Green Party in the coalition, it is unclear exactly how the new government will approach the oil industry.

Jonas Gahr Støre: Friend or foe to the oil industry?

Leader of the new coalition, Jonas Gahr Støre, has not been clear on what his government’s ultimate position on Norway’s oil industry will be. But he has already gone on record to dismiss the Green Party’s more radical approach of severing one of the country’s major income streams.

Støre is a 61-year-old millionaire who has campaigned against social inequality in a career that has seen him as chief of staff at the World Health Organisation (WHO) and State Secretary and Chief of Staff for Jens Stolberg’s first government.

He has stated that his Labour Party will refuse to accept a coalition on the basis of a complete halt to production of oil, but he has conceded that his government will focus on cutting CO2 emissions in line with the 2015 Paris Agreement.

Yet, the Labour Party may find opposition to this more neutral stance from the Centre Party and Socialist Left Party, which will hold decisive stakes in Støre’s new government.

The Socialist Left Party’s manifesto states, “Norwegian oil must remain where it is now, untouched and beneath the ocean. The ocean is among Norway’s most important resources right now, but also for our future generations.”

Whatever the new government eventually does decide, it will be keenly watched by members of environmental campaign group Extinction Rebellion's Norwegian charter.

The group staged a protest in Oslo's city centre three weeks ago, storming the government's Oil Ministry after a demonstration outside a state-owned oil company, Equinor, was curtailed by the police.

Over 29 demonstrators were arrested from the occupation at the company.