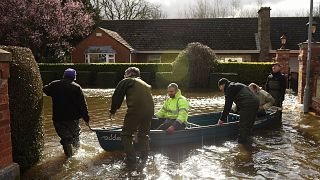 As Storm Christoph runs riot in the UK, one company is offering its flood-hit customers free counselling.

People are currently being evacuated from their homes as England and Wales are hit by widespread flooding. Weather forecasters have warned more heavy rain is on the way, along with blizzards and a foot of snow.

So far, over 500 flood warnings are in place, with the Manchester suburbs of Didsbury and Northenden being the worst affected areas.

To help people cope with the immediate impacts of flooding, from damaged properties and the destruction of crops to the grief caused by lost lives, one insurance company is providing a new service for victims.

Calling the impact of climate-related weather events “devastating”, Zurich UK is providing five therapy sessions to policy-holders and their immediate families over the age of 18. The insurer is also demanding that the British government overhaul the “broken” flood grant system to further protect people.

“The physical impact of extreme weather is impossible to ignore. But there is reason to be concerned about another, ‘hidden’ consequence of the UK’s increasingly destructive weather – the harm it is doing to people’s mental health,” says David Nichols, Zurich UK’s Chief Claims Officer.

“With the country still in the grip of COVID-19, tens of thousands of people face the double disaster of flooding overlaid by the pandemic. If ever there was a moment to wake up to the mental, as well as the physical devastation caused by flooding, it is now.“

Studies at the University of York and the National Centre for Social Research show that people whose homes are damaged by storms or flooding are significantly more likely to experience mental health issues, such as depression and anxiety. This also takes into account other factors such as social disadvantage, debt and poor physical health.

People hit by storm and flood damage were 50 per cent more likely to experience poorer mental health, according to the study.

As the climate crisis intensifies the frequency and severity of extreme weather, it is crucial that we all seek mental health support.

Feeling overwhelmed and anxious is not uncommon at all, with more and more of us reporting feelings of “eco anxiety”. The condition is defined as an apprehension towards climate change, which manifests as a form of existential crisis.

How are climate change and floods connected?

Human activity results in heat-trapping pollution, which encourages sea levels to hike up. Sea levels rise when glaciers and ice sheets melt, adding water to the ocean, and the volume of the ocean gradually expands as the water becomes warmer.

By 2100, areas now home to 200 million people could fall permanently below the high tide line.

Extreme floods can also be triggered by intense precipitation, according to UN environment. In the case of the UK, the Intergovernmental Panel on Climate Change (IPCC) found that this is the principal cause. This is an increasing trend in Europe, especially for winter flooding.

“While it is difficult to make a direct link between an individual extreme event and climate change, it is clear that we need to be prepared to face more intense and more frequent extreme hydro-meteorological events due to climate change,” states Pascal Peduzzi, Director of the United Nations Environment Programme’s (UNEP) Global Resource Information Database in Geneva.

How to stay safe

If your home is at risk of flood damage, here is some guidance on how to keep yourself safe.