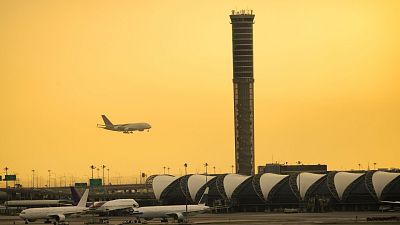 Although China's mega airport has gone ahead, many others did not, following environmental activism.   -   Copyright  Canva
By Mishti Ali  •  Updated: 01/07/2021

Chengdu has just become the third city in China to have two international airports, as part of the country's rapid airport expansion project.

China currently aims to have 400 airports operational by 2035, meaning there will be an additional 160 airports over the next 14 years. Critics have noted that these plans seem at odds with President Xi Jinping's pledge to reach net-zero emissions by 2060.

The Chengdu Tianfu International Airport officially opened for business this week, with its inaugural flight to Beijing on Sunday.

This is only phase one of the 'mega airport', which can now handle up to 60 million passengers per year. The project has cost €9.14 billion so far, with three runways and two terminals currently in operation.

The second phase will reportedly see the airport cater to 120 million passengers annually, with a total area of 1.4 million square meters according to state media outlet Xinhua.

Chengdu Tianfu Int'l Airport in SW China's Sichuan Province has opened for operations, with a flight bound for Beijing taking off on Sunday morning

Currently, China is responsible for nearly 30 per cent of global greenhouse gas emissions - though, on a per capita basis this is roughly in line with countries like the UK and well below the US and Australia.

However, the rise of mega airports - a term for airports that are so large they are built in multiple phases - is causing concern for environmentalists, who stress that we need to limit our flying if we want to meet the Paris Agreement targets.

The impact of flying on the planet

An economy-class return flight from London to New York is responsible for an estimated 0.67 tonnes of CO2 emissions per passenger, according to the calculator from the UN's civil aviation body, the International Civil Aviation Organization (ICAO). That's equivalent to 11 per cent of the average annual emissions for someone in the UK - or the full extent of those caused by someone living in Ghana in a year.

Aviation contributes about two per cent of the world's global carbon emissions, according to the International Air Transport Association (IATA). The organisation also predicts passenger numbers will double to 8.2 billion in 2037.

As passengers increase and other industries move towards more sustainable alternatives, it is likely that the proportion of overall emissions accounted for by the industry will rise.

In the face of these challenges, many countries have chosen not to open new airports or renovate existing ones.

Here are four examples of countries that decided against airport renovations and new constructions due to potential environmental repercussions.

Which countries have decided against airport expansion projects?

In February this year, the French government announced that they had scrapped plans for a major expansion at Charles de Gaulle airport due to climate change concerns.

According to an interview given by a French minister to Le Monde, the €9bn expansion was “no longer aligned with environmental policy”.

The expansion of Leeds Bradford airport has been put on hold temporarily after the government paused plans to build a new terminal building on the green belt, which refers to protected land.

Despite widespread opposition from local MPs, residents and environmental groups, the plans had been granted conditional approval by Leeds city council.

In response, the government issued a direction to Leeds City Council preventing councillors from granting planning permission without special authorisation.

However, the Leeds Bradford project is not permanently on hold. The UK government are still reviewing the plans, with a decision pending.

Renovations at Gimhae airport were suspended after the government required the need for them to undergo a “fundamental review”.

The panel responsible for the decision also said the original plans failed to properly take into account the project’s environmental impact - such as noise pollution and its effects on wildlife - or possible limitations on operating hours to prevent noise pollution for locals.

Portugal’s aviation regulator refused to evaluate a plan to build a new airport in Lisbon - a project which had been under consideration for five decades previously.

In 2019, the government said the Montijo airport, where there is already a military airbase, would be completed next year.

But the regulator, ANAC, rejected the evaluation request as not all local municipalities were happy with the plans, with some stating environmental concerns.