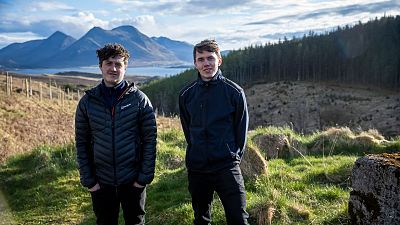 Two friends have started a campaign to make their tiny, remote island 100 per cent sustainable.

Raasay is a small island off the coast of north-east Scotland, with a population of just 171 residents. It's no stranger to self-reliance and renewable energy - there is a community garden and a diesel-electric hybrid ferry already.

But the next generation want more. They are aiming to provide jobs, investment opportunities and above all 100 per cent independence from non-renewable electricity sources with the help of hydro-energy.

Ross Gillies and Ross Camilli, now in their early 20s, came up with the idea and set out to make a Facebook Group along with a Community Benefit Society. Their goal was to build and operate two community-owned hydro-electric generation schemes and produce on average, 520,000kWh of electricity each year. Bear in mind, the daily average electricity usage in the UK is 8 - 10 kWh per day.

To their surprise, the campaign received outstanding support and managed to mobilise a wider community even further afield than their island. Eventually, the crowdfunding campaign brought them the necessary help.

They estimate that the island will save 127 cubic tonnes of CO2 emissions per year, approximately equivalent to what 25 petrol cars would emit on average annually.

Click on the video to watch the two friends tell their story and catch a glimpse of some striking Scottish scenery along the way.