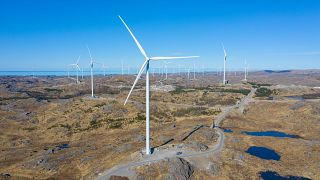 Global operations at Facebook are now supported by 100 per cent renewable energy and have reached net-zero emissions, says the tech giant in a milestone announcement today.

In the last three years, the company has reduced its greenhouse gas emissions by 94 per cent, exceeding its 75 per cent reduction goal. It set out these goals in 2018, and is now one of the largest corporate buyers of renewable energy. The 63 renewable projects are new and located on the same electrical grids as the data centres they support.

“We have massively and rapidly ramped up our progress on climate, we’re now working with energy providers to procure enough renewable energy to run our offices and our data centres,” Eoghan Griffin, sustainability manager for EMEA at Facebook, tells Euronews Living.

“Say for example we are going to build a data centre. We know roughly how much energy it takes to run it, so we will work in partnership with an energy provider very early on in that process, giving them a sense of the market. That way we are able to commit to it up front and they are able to fund the infrastructure, whether that’s solar panels or wind turbines.”

With contracts in place for more than six gigawatts of wind and solar energy across 18 US states and five countries, that means offices and data centres are all supported by clean energy.

With contracts in place for more than six gigawatts of wind and solar energy across 18 US states and five countries, that means offices and data centres are all supported by clean energy.

So does this mean Facebook is completely green? There is still some way to go, the company admits, but the next milestone is in sight. By 2030, it won’t just be global operations that are 100 per cent renewable, the aim is to reach net-zero emissions in the value chain too. That means any hardware manufacturing, physical materials, goods & services and products made by Facebook will all produce net-zero carbon emissions.

With many companies working towards goals of 2045 or 2050, Griffin says 2030 is a tough time frame to set themselves, but adds that it’s the right thing to do and is achievable with a massive amount of investment.

Facebook prides itself on its offices, famous for being beautifully designed from the inside out, with room for fun and games too. But sustainability is also embedded into the very core of the buildings.

In head offices in London, efficient LED lighting is used throughout, a move which has reduced the company’s carbon emissions by over 41 tons a year. This equates to the same amount of power used by ten houses over one year.

Then in 2019, Facebook London led the way in removing single use plastic water bottles from its kitchens, saving more than 1.4 million water bottles ever since and avoiding over 200,000 kg of plastic waste.

And it’s not just inside where the environmental improvements are being made. Two years ago, the company earned the ISO 50001 Energy Management certification across all sites in the UK and Ireland, joining the ranks of leading companies recognised for their sustainable approach to real estate growth.

Facebook even works with the London Bee Keeping Association, having developed a bee-friendly terrace in the London office.

For Earth Day this year, Facebook is empowering people to get informed and take action on the climate crisis. Partnering with Yale University, it ran a survey in over 30 countries and territories to find out how much people know and care about the planet.

Results showed that in every country, over three quarters of people believed that climate change is happening, but fewer understood that it’s caused mostly by human activities.

7 in 10 people were supportive of the Paris Climate Accord. But the majority of people feel they still need more information about climate change, including more than half of people in Nigeria who said that they wanted a lot more information.

The majority of people surveyed also felt that climate change should be a high or very high priority for their national government. In Europe, that’s 86 per cent of people in Spain, 84 per cent in Italy, and 81 per cent in France.

More than 7 in 10 people in the United Kingdom feel that their government should do more to address climate change, compared to Saudi Arabia and Egypt where 4 in 10 people thought their government was currently doing enough. There was less consensus about whether people think they are vulnerable to climate change. Less than 60 per cent of people in Ireland think they will personally experience at least a moderate amount of harm.

Data like this is crucial to help Facebook understand how it can better spread credible, digestible information to its billions of active users. Earth Day is a chance to bring more people together and build awareness on how we can protect the planet as a global community.

One way the company seeks to spread awareness and educate is through the Climate Science Information Center on Facebook. More than 1.3 million people now follow the page and over 100,000 people visit it every day.

“This is a perfect time for Facebook, with our amazing platforms. I think we have 2.8 billion monthly active users on Facebook alone and 3.3 billion people using all of our apps, where we can really amplify key messages,” says Griffin.

I think we have 2.8 billion monthly active users on Facebook alone and 3.3 billion people using all of our apps, where we can really amplify key messages.

By connecting people with credible and creative content, this helps us learn more about key environmental issues and inspires us to engage more.

How you can get involved

Earth Day marks the anniversary of the start of the environmental movement that began in 1970. On Thursday 22nd April, we need to address global challenges like the climate crisis.

Here’s a list of all the ways you can take action.

Facebook will also be doing an Earth Day Livestream, partnering with EARTHDAY.ORG to bring its virtual event to its Climate Science Information Center, starting at 12:00PM ET (6.00PM CET) on April 22.