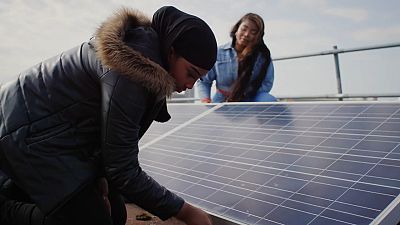 Citizen energy cooperatives across Europe are fighting to bring the benefits of renewable energy production back into local communities.

The idea is not entirely new. Small groups have been generating their own renewable power for decades. But today, the network of communities across Europe is up to one million people.

The European Federation of Energy Cooperatives represents 1,500 energy cooperatives in Europe. Together, they want to compete with big extractive energy monopolies which exacerbate the climate crisis.

American outdoor company Patagonia has just released a documentary 'We the Power', to encourage citizens to join the growing network of these communities and take part in the clean energy transformation.

However, the road to upend the traditional energy system has yet to gain support from lawmakers.

In many cases, it is difficult and expensive to hand over clean electricity production to communities. In Spain, for instance, the conservative government launched a so-called ‘sun tax’ in 2015 to charge people who produced their own electricity. (In 2019, the government approved new regulations to support collective self-consumption and production of electricity. They also eliminated this tax.)

In the UK, a network of communities is rising up quietly and driving legislative change to ensure communities can financially benefit from producing renewable energy.

In the UK, the community energy sector makes up more than 300 organisations.

In 2019, the organisations in England, Wales and Northern Ireland reduced carbon emissions by 65,200 tonnes. They also produced over €5.3 million (£4.6 million) in community benefits, including grants and loans for local people and organisations, according to the press release Patagonia shared along with the documentary.

The film presents the story of some of these communities and their fight - which has reached the European Parliament. The documentary concludes that by 2050 there could be more than 260 million people across Europe signing up to help generate up to 45 per cent of the EU's energy.

Click on the video above to learn more about citizen-led community-energy movements in Europe.