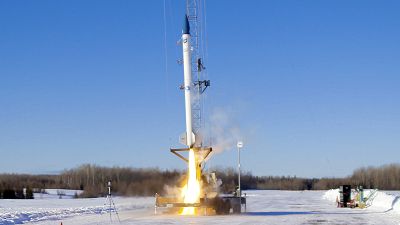 A company in Maine, US, has launched the world’s first commercial biofuel powered rocket.

Called Stardust, it is a prototype for a design intended to take small satellites and research projects into space. It was created by Maine-based aerospace firm, bluShift.

Launching on Sunday in sub-zero conditions, Stardust flew 1,219 metres into the air carrying a high school science project, a metal alloy being tested by a New Hampshire company and a Dutch stroopwafel.

The rocket is just 6 metres long, weighs 250kg and is cheap to fly. It doesn’t need the same amount of infrastructure to launch as larger rockets, so the company hopes it will help make space research more accessible.

A later version of the rocket, called Red Dwarf, will be able to enter orbit sometime in the future. It could carry tiny 10cm by 10cm satellites, known as Cube-Sats, 160km above the Earth’s surface.

BluShift says wants to become the first “Uber to space". It is focusing on rockets carrying small loads instead of the thousands of kilograms others like SpaceX are aiming for.

How do you power a rocket with biofuel?

Sascha Deri, founder of bluShift and inventor of the rocket biofuel, says that the idea came to him sitting around the kitchen table at his brother’s organic farm. He spotted a “substance” on the windowsill and started to wonder if biofuels could replace petroleum-derived fuels in the rocket engines he was testing.

What this “substance” is, is still a closely guarded secret.

When they tried it, Deri says they found that their invention performed better and was cheaper than standard rocket fuels while also being very close to net carbon zero. As was demonstrated at the snowy launch, the fuel can be used in a wide variety of temperature conditions.

"We are in the state of Maine where it can be very cold and we are seeing weather conditions here that have temperatures that are similar to that of Mars," Deri told Euronews. He added that NASA has looked at their particular type of technology to potentially use it to return payloads from the red planet.

What this “secret sauce” is made up of is still a closely guarded secret but he explains that it can be found on farms around the world and is renewable.

“You could technically eat our fuel, I wouldn’t recommend it, but nothing bad would happen to you. Totally non-toxic,” he said in an interview before the launch.

“As far as I know, we are the first company in the world to commercially launch a rocket using a bio-derived fuel.”