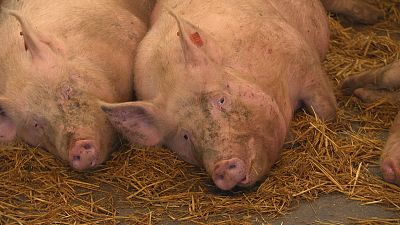 In this episode of 'Farm to Fork,' we look at examples of sustainable farming in Europe.

More than 40 million tonnes of meat is produced in the continent each year for human consumption.

As a result, animals can pay a tough price in the system to meet demand - with intensive farming conditions making livestock more prone to diseases.

At least 20% of livestock production is lost globally, due to diseases developed, according to the World Organisation for Animal Health.

The 'Farm to Fork' strategy is at the heart of the European Green Deal, aiming to make food systems fair, healthy and environmentally friendly.

We visited some pig farms in Northern Italy, close to Milan, Brescia and Cremona, where they are adopting healthy practices, as head of breeding at Fumagalli, Pietro Pizzagalli, explained.

"For us, animal welfare means ensuring that within the breeding environment the animal can express its natural behaviour, that it can express, at the maximum, the ethology of behaviour for its species."

In the Fumagalli farm, close to Cremona, pigs live in partially open-air pens - and have plenty of space to move around. The animals also get lots of straw, bringing benefits, like the reduction of stress.

Conditions inside the barn are constantly monitored, including the air quality and temperature. The data is then available in real-time on the farmers’ smartphone.

"On this site, specifically, we have installed a control unit, developed by a start-up, allowing us to check, minute by minute, the main environmental parameters of animal welfare. Thanks to this type of management, we have significantly reduced the use of antibiotics," Pietro added.

The animal welfare chain starts at the insemination unit. At Nerviano pig farm, people can only enter wearing special clothing and must follow strict hygiene rules.

The sows remain there for two pregnancy cycles - and are given plenty of space, as breeding manager, Giorgio Santi, explained.

"​Unlike the European Convention, that says she can stay in the cage for 28 days, here we keep her only 36 hours in the cage (for two fertilisation cycles) and then we release her, and she is free to go wherever she wants," he said.

Euronews also visited a maternity unit in Ghedi, next to Brescia, where the pens are also larger than those in standard breeding farms.

The sows have what they need to prepare for giving birth, and piglets have specific heated nursery boxes, where they can feel protected.

Consumers are also showing more willingness to make a choice based on the animal standards applied by the farmers, as Arnaldo Santi, head of marketing at Fumagalli, explained.

"​Today the consumer chooses the product not only for its goodness. It represents only 50 per cent of the attractiveness of the product, the remaining 50 per cent is given by a series of values, such as the origin of the animal, its living conditions, and the possibility of having a fully tracked system; that makes a difference on the market," he said.

Countries such as Denmark have already implemented an animal welfare label.

By 2023, the European Commission will present a proposal to redefine the current animal welfare legislation and promote policy coherence.

How to reduce food waste (and why it's so important)