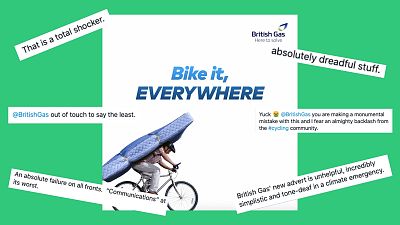 A campaign by British Gas has been heavily criticised on Twitter for its 'tone-deaf' approach to the climate crisis.   -   Copyright  Twitter
By Marthe de Ferrer  •  Updated: 10/03/2021

Energy company British Gas is under fire after releasing a series of controversial adverts to promote its new ‘green’ tariffs.

One post on social media shows a man cycling with a mattress strapped to his back, with the words “Bike it, EVERYWHERE - or all our electricity tariffs are zero carbon to help you do your bit.”

A similar advert shows a reusable tote bag alongside the captions “Use that bag for life, your ENTIRE life - or join our 1.6 million customers enjoying 100 per cent renewable electricity.”

Both videos are part of a campaign telling potential customers “you can go green without the extreme," produced by international digital brand agency Nucleus.

The response to these adverts on Twitter has been overwhelmingly negative so far, with some accusing British Gas, the UK's biggest energy supplier, of greenwashing.

One user asked, “Can you please explain what on earth you mean by the reference to bags for life being ‘extreme’?”, while others deemed the messaging to be “awful”, “dangerous” and “unhelpful.”

The the sheer size of the changes that we need to make - individually and as a society - to successfully combat climate breakdown is widely underestimated. Spreading the idea that just changing electricity tariff solves the problem is totally irresponsible. @britishgas

According to the Advertising Standards Authorities (ASA) who regulate commercial content in the UK, multiple formal complaints have been launched about the campaign.

The ASA has not launched an investigation into British Gas at this time, but a spokesperson told Euronews Living that they “are carefully considering the complaints and looking at the ad in question to establish if there are grounds for any further action.”

Why are people complaining about the British Gas campaign?

We spoke with Adam Tranter, a marketing professional and founder of #BikeIsBest, about his issues with the adverts.

“It’s just tone deaf,” Tranter explains. “Lots of things need to change in our society in order to literally save the planet, and to imply that’s not the case for commercial gain, is probably one of the worst things you can do. It is really misleading.”

“It shows how worryingly simplistic British Gas thinks climate issues are,” says Tranter, “I don’t think there are many people out there who think that by purely switching to a different energy tariff that they can solve the world’s climate problems.”

Just be careful how much you carry! ?️
Want to go green without the extreme…it might be easier than you think. ??

From a marketing perspective, Tranter also argues that it is a fundamentally weak campaign, particularly as consumers are more aware of greenwashing than ever.

“They missed the mark by oversimplifying it. People switch energy companies all the time, there’s a trend of new, green energy companies and British Gas has to reinvent itself to meet that, but in the way they’ve approached it they’ve effectively shown they don’t have any credentials in this area.”

“The customers that are looking to switch to green energy can see through the campaign quite clearly,” adds Tranter. “A lot of customers are thinking about the impact of what they buy nowadays. It’s bad enough being ill-informed, but being disingenuous too isn’t what attracts customers to brands.”

“‘You can’t carry a mattress on a bike’ is the kind of tired old trope we’d associate with people seeking to denigrate cycling as a legitimate and sensible means of transport for making everyday, local journeys,” says Jones.

“A marketing team trying to ‘greenwash’ a product in this manner, is particularly tired and tacky.”

Jones makes the point that “using the right tool for the job” is central to the “pragmatic argument in favour of sustainable and active transport.”

“I don’t drive a removal lorry just in case one day I decide to move house,” Jones explains. “It’s driving around on your own, making short journeys day in, day out, in a car with as many as four empty seats, on the basis that ‘one day I might need to shift a mattress’ that’s ‘extreme’.”

How has British Gas responded?

According to British Gas the campaign “has received a positive reaction” overall, and is intended to reach customers who are increasingly eco-conscious and looking for ways to live a greener life.

“This is intended to raise awareness of sustainability choices,” says a spokesperson for British Gas, “and how through green energy tariffs, British Gas can support customers to take action towards more sustainable living. It [the campaign] highlights simple ways people can do more.”

The use of a man cycling a mattress in the campaign, according to the representative for British Gas, is “to be a playful contrast to ‘simple’ and not meant to be a realistic representation.”

The tote bag example is also apparently intended to be “another light-hearted reference”, while showcasing the company’s “sustainable solutions.”

What do you think of the adverts? Join in the conversation on Twitter by tagging @euronewsliving.