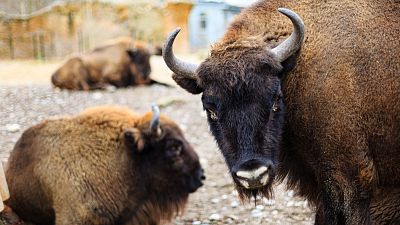 The search is on for two rangers to help introduce European Bison to a thousand-year-old British woodland.

Two recruits are being sought out by Kent Wildlife Trust and the Wildwood Trust as part of a scheme to bring the species to a 200-hectare area of Wilder Blean wood in Kent. No previous experience with Bison is required and there will be training in the Netherlands where the one-tonne animals have already been successfully introduced to several nature reserves.

This “job of a lifetime” is the “first of its kind to be advertised in Britain” according to Mark Habben, Head of Living Collections at Wildwood Trust.

“European Bison are a fascinating, important species in the UK and we look forward to the positive impact that they will have when inhabiting the Blean woods,” he adds.

The European Bison is the continent’s largest land mammal. One hundred years ago they were all but gone from the wild but conservation efforts have seen the species bounce back from the brink of extinction. There are now 47 free ranging herds of the Bison across Europe in countries including Romania, Poland and Belarus.

But it has been 6,000 years since their now-extinct relatives, the Steppe Bison, roamed the British countryside. The introduction of the large land mammal to Blean Woods, near Canterbury in south-east England, aims to restore the ecosystem of the ancient woodland using a “nature-based” solution.

“This is a first step to European bison becoming more frequent tools for the restoration of ecosystems in Britain and for two individuals to get to know these animals like no other,” says Stan Smith from the Kent Wildlife Trust.

How do Bison help manage woodlands?

These European Bison are being introduced to Wilder Blean to a job: protecting this ancient habitat and the wildlife that lives in it. A lack of woodland management is one of the eight major contributors to species decline in the UK, according to the National Biodiversity Network.

Bison are able to change the environment they live in through their natural behaviours. They fell trees to allow space and light in dense woodland, producing deadwood as a result that encourages insects and fungi.

The trusts also say that dust bathing, an activity which keeps the Bisons’ skin healthy, creates bare patches of earth which are good for lizards, wasps and rare plants. To have a positive impact on the woodland, their behaviour must be as natural as possible so rangers will have to monitor and assess any interactions with visitors.

European Bison are just one species that is being used to ‘wild’ the area. To create a varied ecosystem and encourage wildlife, other grazing animals such as the Konik pony are also being introduced to the woodland.