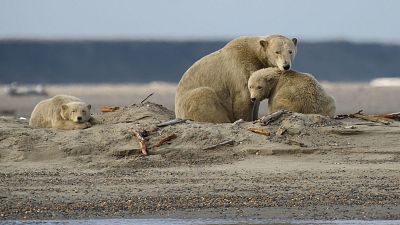 The Trump administration has auctioned off parts of the Arctic National Wildlife Refuge (ANWR) in Alaska for oil and gas drilling.

A federal judge rejected requests by environmentalists to block the auction, allowing it to go ahead on Wednesday this week.

The battle to prevent drilling rights from being sold in the region has been going on for 40 years and is at the centre of the US conversation about fossil fuels. This auction comes after plans for an offshore drilling project in the Beaufort Sea were rejected in December last year.

An estimated 11 billion barrels of oil could lie beneath the Arctic refuge. Opening it up to oil and gas drilling has long been a goal of the Alaskan Republican party who say it is vital for the economy of the state.

In a post on Twitter, Alaskan Governor, Mike Dunleavy said it would “bring billions of dollars of investment”.

This first sale of oil drilling rights is taking place just two weeks before Donald Trump is due to leave office. He has been named the “worst president for [the] environment in history”, by nonprofit organisation Earthjustice.

President-elect Joe Biden has vowed to ban all new drilling on public land. He has promised to “permanently [protect] the Arctic National Wildlife Refuge and other areas impacted by President Trump’s attack on federal lands and waters”. In practice, it could prove difficult to reverse any drilling rights auctioned off at this sale.

Created in 1960, ANWR is the largest intact wilderness in the US, covering nearly eight hectares of land and water in northeastern Alaska. This ecosystem is an important breeding habitat for polar bears who rely on the land more and more to build their dens as sea ice rapidly disappears.

More than 200 other species also live on the land including caribou, arctic foxes, golden eagles and snowy owls.

Parts of this Arctic wilderness are also sacred to the Indigenous Gwich’in people. The Coastal Plain is known to them as “Iizhik Gwats’an Gwandaii Goodlit” or "The Sacred Place Where Life Begins”. The Gwich’in people have relied on the Caribou herds of nearly 17,000 that travel to the plains to give birth for thousands of years.

“The Gwich’in and Iñupiat people have been the caretakers of Alaska’s Arctic for millennia — and selling the coastal plain for corporate profit disregards that legacy of stewardship,” a coalition of Indigenous, human rights and environmental organisations said in a statement.

“Indigenous Arctic people are already experiencing the most dramatic climate impacts in a region warming at three times the rest of the planet, and selling out the coastal plain puts our climate and the Arctic’s people, land and wildlife at further risk.

“Arctic oil drilling will boost carbon emissions even further and harm communities already bearing the brunt of the changing climate.”

Energy companies say no to drilling

However, significant changes in the oil industry have meant the auction attracted little to no interest from major energy companies when it went ahead earlier this week.

The bids for leases to drill oil and gas in the Arctic Refuge totalled around $14 million (€11.4m) - much less than the billions of dollars promised by those who backed the sale. Half of the leases being offered attracted no bids at all.

Last year, all major US banks, including the Bank of America and Goldman Sachs, issued statements to say that they would not finance oil drilling in the Arctic region.

Energy companies such as Exxon, Shell and BP have also said they are focusing their spending on renewable energy rather than fossil fuels. Decisions like these have no doubt been driven by the effects of the coronavirus pandemic which saw oil prices plunge while people stayed at home.

Adam Kolton, executive director of the Alaska Wilderness League, called it an “epic failure for the Trump administration”.

“After years of promising a revenue and jobs bonanza they ended up throwing a party for themselves, with the state being one of the only bidders,” he added.