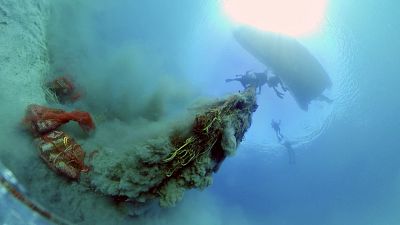 As part of Euronews' Green Tomorrow initiative, our search for innovative technology to combat marine litter has taken us to the Croatian island of Lošinj, a magnet for tourists and also an important place for wildlife in the Adriatic Sea.

But like many coastal areas, these crystal-clear waters are still plagued by the serious issue of litter pollution.

Each year, eight million tonnes of plastic enter the oceans around the world. The pollution is harming the biodiversity - and spreading diseases and toxins throughout the food chain.

Local scuba-diving students have volunteered to help clean up some of the trash accumulated over the years in the otherwise picturesque marina.

Neno Starčić, Diving Instructor and Owner at the Sub Sea Son Dive Centre says a lof of human-produced litter and debris is found on the sea bed:

"You see mostly plastic, nylons, everything that sometimes sits on the beach.

"Then, when the wind starts to blow, that can end up in the sea.

"And there's a big question: who will clean this up?"

It's estimated that one fifth of all fishing gear in European waters ends up lost or intentionally abandoned. It can take centuries to fully degrade and makes up a quarter of all marine litter found in Europe.

Finding these abandoned nets at sea and lifting them to the surface is not easy.

Jelena Basta, Director of Education at the Blue World Institute of Marine Research and Conservation says the hazard for marine wildlife the old fishing equipment presents is known as 'ghost fishing':

"They're like a trap for many marine organisms — they get completely entangled.

"This particular type of net is made of nylon - which is plastic - that in the end turns into microplastics.

"And this is how we will end up having particles of microplastics in our bodies."

Finding 'ghost nets' and other marine litter can be easier with new technology. Researchers from the European project "marGnet" work in Croatia and Italy, testing a high-resolution underwater scanning system.

Federico Riccato, Researcher in ecological monitoring with the Laguna Project says it's essentially a sonar:

"It's located not on the boat at the surface, but directly on the seafloor.

"The boat can move, drift with the wind, whereas this instrument is steadily fixed at the bottom.

Its head rotates 360 degrees, providing us with a seabed map with the precision of one centimetre."

The plan is to use this technology to map pollution hotspots which can then be cleaned up by professional diving teams.

The scanner is capable of detecting underwater objects within a radius of 150 metres and transmitting the results back up to the boat in real time.

Riccardo Fiorin, Researcher in Ecological Monitoring also with the Laguna Project, says it makes it easy to spot manmade objects on the sea floor:

"On the (monitor) screen, you can see the round shape of a tyre, or the elongated shape of a rope.

"This system can be used in combination with other methods to identify objects on the bottom, especially if the water lacks clarity."

In the Adriatic sea off Lošinj, the water is extremely clear, but the same technology can be just as effective in murkier waters — like the Venetian Lagoon in Italy.

High tides often wash litter off the streets in Venice and into its famous canals — but local authorities and activists are fighting this problem.

In Venice as in many other coastal cities arouind the world, cleanup events have become an annual tradition.

Volunteer action in Venice and dozens of other locations is supported and coordinated by local and international organisations; last year, the European Union in partnership with the United Nations, mobilised over 40,000 volunteers in nearly 80 countries to take part in the #EUBeachCleanup campaign.

Plastic Free Venice Lagoon is one of the numerous local groups that participated in this year's cleanup. Some volunteers removed floating debris from the historic canals, while others picked up rubbish washed and blown ashore.

Taking a boat to Murano Island, renowned for its glass-making, we find a less-visited part of it littered with garbage.

Besides cleaning up places like Murano Island, the activists work all year round on raising public awareness.

"I think that one of the most important things is to get people closer to the problem of marine litter, of how we treat our environment, and try to recreate a bond that's been somehow cut off in our modern civilisation between us and our environment.

"This is the key to make bigger changes — much bigger than cleaning up a little piece of the lagoon."

The "marGnet" research project that co-organised this cleanup believes that plastic waste should actually be treated as a useful raw material.

The bags of litter being brought back from Murano don't have to end up in an incinerator or in landfill; we're assured during the return journey that we'll see how they can be recycled.

Fantina Madricardo is a Researcher in Underwater Acoustics at the ISMAR Institute of Marine Sciences and also the MarGnet Project Coordinator.

She believes projects lke this are a good way of beginning to break the pattern of waste and pollution:

"This plastic already exists. So you have to collect it, to remove it, to try to recycle it. That's what we are doing with the marGnet project.

"We try to really close the cycle and, of course, to involve the people and raise awareness."

Over the course of a single cleanup day in Venice, this group has collected almost three tonnes of waste, including hundreds of kilos of plastic.

The collected rubbish is shipped to Sintol, a small company near Turin that specialises in pyrolysis: this process is the thermal breakdown of materials at extremely high temperatures, in the absence of oxygen.

The prototype device breaks down plastic by heating it to 400°C.

"Pyrolysis is currently the only known way to process mixed waste without the need for pre-treatment. The litter is simply loaded in, just as it was recovered from the sea."

Gian Claudio says the plastics are melted into crude pyrolysis oil, that can then be refined into fuel:

"We (create) a light fuel suitable for engines, which can be used in boats."

There's hope that by working together, researchers, activists and the general public can counter one of the fastest growing threats to the world's oceans.

If we fail to arrest the surge of marine litter, in three decades' time, the oceans could contain more plastic by weight than fish.

Sea to plate: how the EU is stopping any fishy business in our oceans

What are offshore renewables? And how do they work?