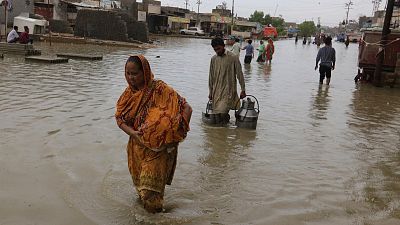 Anmol Irfan is a writer, feminist, and founder of Perspective Magazine. Here she shares her views on how the largest city in Pakistan should not have ignored warnings about the climate crisis.

Over the last week, torrential rains have ravaged Pakistan’s cosmopolitan hub. Breaking records of over 90 years, the city has been flooded as its systems and infrastructure find themselves unable to cope with the unprecedented amount of rainfall.

But how much does this have to do with climate change?

The city’s inability to deal with rain isn’t exactly a revelation - previous years have seen monsoon seasons cause substantial damage. But this year, it’s a crisis like never before. Chief Minister Murad Ali Shah has reported 63 deaths in rain related incidents already, while entire residential areas and markets have been submerged, causing millions of rupees worth of damage to houses and businesses.

The onslaught of such a disaster has come as a shock to locals who wonder why officials didn’t put preventative measures in place, with full knowledge that the rainy season was coming.

“It’s not something that’s happened recently. This has been 30-40 years in the making,” explains Vice Chairman of the Lahore Development Authority, SM Imran. The neglect of Karachi’s development is cited as the main reason behind the city’s current crisis. Despite the city’s importance to Pakistan’s economy and development, sustainable growth of the city has never been a political priority, he adds.

As roads collapse and sewage systems overflow, questions are arising as to where years worth of taxpayers money has gone. Residents of various areas in the city are experiencing three-day long power shortages and stagnant water blocking the streets.

Did Karachi ignore the warnings?

Karachi’s situation is a glaring example of what can happen when climate change warnings and sustainable growth are neglected - in favour of political optics and superficial development.

In a country that has faced significant damage in the past due to droughts, this influx of rain could have been a game changer. But instead, a lack of preparation has turned what should have been years worth of water storage into a city-wide economic disaster.

To make matters worse, the drainage system which collapsed in DHA, supposedly the posh area of the city, was built in 2007 and residents were charged for it.

Moving forward, it is imperative we understand exactly where the problem lies. The lost lives and flooding are horrific enough - but the damage they have caused may not be fixed for years to come.

How will the city recover?

This year’s disaster has proven that there is no time to be lost. Priorities need to be set in order for changes to be made. Instead of focusing on other aspects of infrastructure that contribute very little to the city’s growth, Imran believes the focus now needs to be on water conservation and treatment.

For Imran, Israel is a good example we can learn from. Its Ashkelon facility provided for 70 per cent of the country’s water demands through a process of seawater desalination. A city that craved rainfall is now richer in water resources. This just shows that we can harness the effects of climate change in our favour, if we know how to. What’s needed now is a complete overhaul of what we thought our future would be, explains Imran.

Karachi has been labelled “resilient” many times over the years. But as the city descends into worse conditions, its resilience is no longer a compliment but an excuse. No longer can this idea of resilience be used to ignore its exacerbating problems.

One possible solution is for local governments to do more than just pass bills. Many now believe that programmes should be put in place to teach employees how best to reuse water and treat rubbish.

Currently though, political solutions seem too little too late, and citizens are stepping up to rehabilitate the city themselves.

Citizens are coming to the rescue

Among the many initiatives taken over by relief workers and organisations, is Saturday Welfare Group (SWG). What started as a group of friends wanting to provide rehabilitation to marginalised communities in Pakistan has grown into a powerful initiative that steps up in times of crisis.

“Everyone is equal who is contributing to or working for welfare,” is their motto.

It's a motto that couldn’t be more fitting with the situation Karachi now finds itself in. Both within the country and among the Pakistani diaspora, fundraising is at an all-time high. It’s a testament to the idea that there are people who want change, and are ready to work for it - they just need an opportunity. Development in Karachi should be carried out on a much more equal scale, and perhaps those truly working for change will finally get the attention they deserve.

Recovery will be a long road, and hopefully when political action begins to reflect the needs of the hour, it will be up to residents to play their role as well. Pollution and littering is a major problem the city struggles with. As trash from the streets finds its way into drainage pipes, it blocks the very waterways that are meant to save the city from such disasters. Conservation initiatives need to be better understood.

This is a responsibility that lies with the educated strata of society, who have the power and resources to implement these initiatives and make them accessible to the masses. Feigning ignorance over harmful habits and actions is no longer a valid excuse.