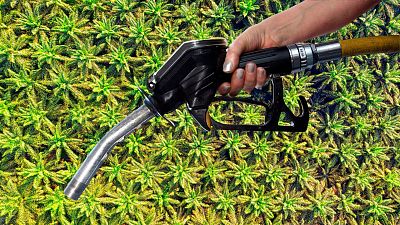 While we are becoming more aware of palm oil in everyday products like chocolate, shampoo and a particularly famous hazelnut spread, there’s one place you might never expect to find it. Your fuel tank.

An Ipsos poll found that 82 per cent of people across eight European countries weren't aware that diesel had palm oil added to it where they lived.

It is in the process of being phased out as the EU removes previous requirements to use the food-based oils in biofuel. The move was originally intended to help the bloc meet renewable energy targets. Despite changes to the EU requirements, individual countries can still promote the use of these oils if they want to.

Recent data from Transport & Environment (T&E), has found that European drivers are burning more palm oil in their car fuel tanks than is in the 40 billion Oreo cookies eaten around the world every year. According to the NGO’s research, use of the “forest-ravaging” oil has reached an all time high with 4.5m tonnes of it going to make biofuels every year, almost twice what is added to household products.

European drivers are burning more palm oil in their car fuel tanks than is in the 40 billion Oreo cookies eaten around the world every year.

Cristina Mestre, biofuels manager at T&E said that “the madness of burning food in cars should stop as soon as possible.” She added that this “failed biofuels policy” was increasing global food prices, driving deforestation and climate change and threatening local communities and endangered species.

“EU leaders have a once-in-a-generation opportunity to phase out all food-based biofuels including palm oil as of next year.”

A coalition of other NGOs, including T&E, has recently relaunched a campaign called “#NotInMyTank” to urge governments in France, Germany, Italy, Spain and The Netherlands to end their support of palm oil and other food-based biofuels as soon as 2021.

What about ‘sustainable’ sources?

An investigation by Greenpeace France last year, into where palm oil used by energy giant Total was coming from, found that assurances of sustainability were “far from being guaranteed”. It alleged that sources supplying palm oil to the company’s La Mède biorefinery in the South of France were using fruits taken from national parks or from cooperatives convicted of illegal deforestation. Total had claimed that it was using only 100 per cent traceable oil.

But the EU is the world’s second largest importer of palm oil and some have warned that a complete ban could see unsustainable practices like this increase. They warn that it would disincentivise “robust standards and practices in poorer countries” as growers turn to alternative markets with fewer requirements for certification.

The IUCN has previously warned that banning palm oil altogether would displace rather than halt the “significant global biodiversity losses” it causes. Sources of oils for purposes from fuel to food, the Union says, would shift to land-intensive rapeseed, soy and sunflower instead. These crops can require up to nine times as much land to produce the same amount of oil, increasing the environmental damage caused by meeting global demand.

According to the IUCN “palm oil is here to stay”, so the answer could lie in markets like the EU ensuring rigorous sustainability requirements are enforced, at least until a viable alternative is found.

The answer is not straightforward. As IUCN Director General, Inger Andersen said in 2018, “When you consider the disastrous impacts of palm oil on biodiversity from a global perspective, there are no simple solutions.”