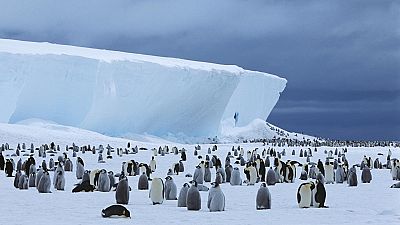 There are 20 per cent more emperor penguin colonies in Antartica than previously thought.   -   Copyright  Getty via Canva
By Marthe de Ferrer  •  Updated: 05/08/2020

Antarctica is home to 20 per cent more emperor penguin colonies than we previously thought.

New research using images from satellite mapping technology has uncovered a major discrepancy between the assumed number of penguins at the South Pole, and the reality. The European Commission’s Copernicus Sentinel-2 satellite captured photographs of the birds from space, finding an additional 11 colonies and bringing the total to 61.

This finding gives scientists a new benchmark, as they track how the climate crisis and ecological changes are impacting the overall population size.

“This is an exciting discovery,” says Dr Peter Fretwell, lead author of the study and a geographer with the British Antarctic Survey (BAS). “The new satellite images of Antarctica’s coastline have enabled us to find these new colonies.

“Whilst this is good news, the colonies are small and so only take the overall population count up by 5-10 per cent to just over half a million penguins or around 265,500 -- 278,500 breeding pairs,” Fretwell clarifies.

Previous attempts to understand the full size of Antarctica's emperor penguin population have struggled to capture the data accurately, as the species rely on sea ice to breed. This means the colonies tend to live in inaccessible areas, with incredibly low temperatures - sometimes as cold as -50°C.

Up until recently, scientists from the BAS have had to look at guano (bird faeces) stains on the ice to identify new colonies.

Are penguins at risk of extinction?

The species are considered ‘Near Threatened’ by the International Union for the Conservation of Nature (IUCN), as sea ice, their preferred breeding habitat, is at risk of melting due to climate change. Studies in 2009 and 2014 from the Woods Hole Oceanographic Institution (WHOI) found that without intervention, environmental changes mean emperor penguins will be battling extinction by the end of the century.

Unfortunately, many of the new colonies have been found in areas which are most susceptible to rising sea levels. The newly discovered penguins are predominantly based at the edges of Antarctica, “one of the most rapidly-warming parts of the planet” according to an IUCN report. The west peninsular of Antarctica has seen annual mean air temperature rise by nearly 3°C, particularly in winter. This is 10 times faster than the average rate of global warming elsewhere on the planet.

"Whilst it's good news that we've found these new colonies,” says Dr Phil Trathan, head of conservation biology at BAS, “the breeding sites are all in locations where recent model projections suggest emperors will decline.

“Birds in these sites are therefore probably the 'canaries in the coalmine' -- we need to watch these sites carefully as climate change will affect this region."