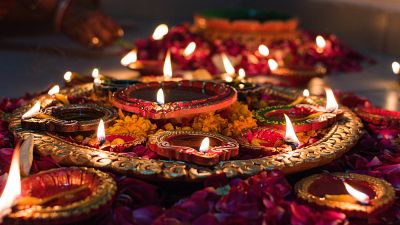 India’s rivers have a very particular problem with pollution. As part of religious celebrations tonnes of flowers left at temples every day, but what happens once they start to wilt?

Once presented at temples and mosques these flowers become sacrosanct and cannot simply be thrown away. For hundreds of years the only method of disposing of these symbols of devotion has been to throw them into sacred bodies of water like the Ganges. As populations have grown and so the number of temples has increased, an estimated 8 million tonnes from somewhere in the region of 600,000 places of worship are now dumped in this way every year.

Many of these mass grown roses, lilies and marigolds are, according to investigations by Phool, covered with pesticides that leach into the river. Toxic arsenic, lead, and cadmium were also found to be contributing to turning these bodies of water into a potentially deadly carcinogenic soup. Despite being completely biodegradable and natural, even the nutrients that come from these decaying flowers can be a problem. Upsetting a careful balance, they cause algae to grow out of control and reduce the amount of oxygen present in the water making life hard for all kinds of marine life.

For a river like the Ganges, which provides a water source for 400 million people, toxicity like this is also highly lethal for humans. Changes in pH from dissolved chemicals help cholera, hepatitis and severe diarrhea to run rampant. Together these illnesses are responsible for 87.6% of child mortality throughout India and Bangladesh. In addition to those who rely on rivers and lakes daily, millions travel to sacred water sources like the Ganges to worship, bathing and even drinking its waters.

Watching these devote bathers bottle these murky waters, Ankit Angwar realised that these worshippers had inadvertently turned against the river they held so dear. As he saw the petals from once bright yellow flowers collect at the bank he decided there must be a better way. With his friend and business partner, Karan Rastogi, Ankit set out to create something new and beautiful from these once sacred offerings.

It was an uphill battle at first. “We had to toil to convey our idea of recycling the temple waste because nobody was willing to take it seriously or give up their floral waste,” writes Ankit on their website. It took a year and a half of pitching alongside consistent research and design in their makeshift lab to find a solution to manage this unique form of waste. What they came up with is an all encompassing theory of change.

Across three cities they collect a mix of devotional flowers from several temples. Workers, predominantly women from disadvantaged backgrounds that the company is working to empower through employment, sort through it to separate out garland threads, paper plates, and any plastic that might have ended up among the flowers. To remove pesticides, they are then detoxified with a special spray containing chemicals which neutralises all of the major organophosphate insecticides and pesticides. Once neutralised, a purple residue remains which is simply washed off. The petals of each flower are then broken down and left to dry out in the sun.

Phool already makes several products from this Flowercycle material. Incense was the first, intended to be used for worship in the same temples that they collect the flowers from. It is even packed in paper filled with Holy Basil seeds as many people find it difficult to throw away items with pictures of gods. The green stems, stalks and leaves are even collected to be turned into compost with the help of worms.

Almost accidentally, the company has also stumbled upon innovations which look to solve wider sustainability dilemmas. Whilst storing the unused flowers to make incense sticks, a dense matt of fibres started to grow that had many of the same properties as leather. They decided to work with this to create Fleather, a vegan leather alternative that is both sustainable in its production and biodegradable at the end of its life. It has already won PETA India’s Best Fashion Innovation Award and the company is looking to start selling internationally to luxury brands in the near future. The fibrous material can also be used to produce Florafoam, an alternative to highly polluting polystyrene, that can be broken down in your own home composting.